Coffee with legs at a cafe con piernas

Santiago is one of those places, like Spain and Florida, where the coffee sucks. I’m not saying you can’t get a decent espresso in Santiago, you can, but the average cup of joe here is worse than what you might find included with the free continental breakfast at a Courtyard by Marriott.
This morning I took the elevator up to the breakfast room on the 21st floor of my hotel where I sat facing a stunning view of the Andes while I tucked into fresh pastries, exquisite fruit, and one of the worst cups of coffee I’ve ever had. I mean, I knew that in Chile when you ask for coffee you traditionally get Nescafé, but this wasn’t even that good. I don’t know what it was. Carob powder? Instant chai?
If I don’t get a decent cup of coffee in the morning, I’m not fit for human conversation. Which was a real problem this morning because I was meeting Daniela, an editor for a Chilean magazine, early for a walking tour of downtown Santiago.
“Listen,” I told Daniela when she asked me if I wanted to go inside the Biblioteca Nacional for a look around, “if I don’t get some coffee quickly, I’m going to start kicking one of these street dogs…and what’s with all the street dogs anyway?”
Okay, fine, said Daniela, a dark-haired woman fresh out of college in Buenos Aires where she studied photography. “Would you like to go to a café con piernas?” 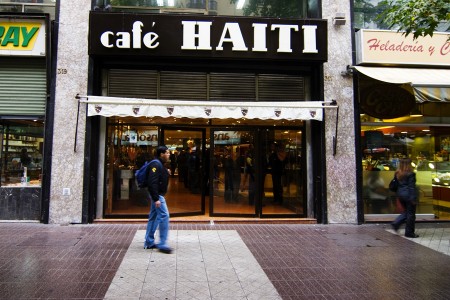 “Great,” I said, thinking this was the name of some Starbucks-like Santiago chain.
She led me to a very sleek, very modern café just off Plaza Armas confusingly called Café Haiti. Inside, a bevy of rather serious-looking (or perhaps bored) young women in brightly-colored short dresses and three-inch heels were serving espresso and café cortado, strong coffee with a little milk, to sharply-dressed businessmen standing up at a long chrome and black granite bar. 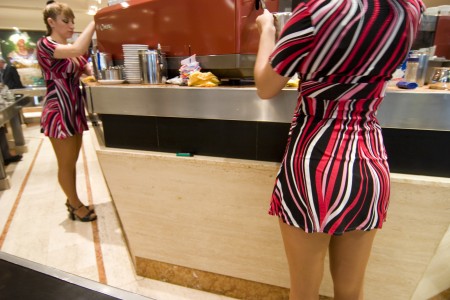 Café con piernas—coffee with legs—have been around “since before I was born,” Daniela told me. “I don’t know why. They are very Chilean. I heard someone tried to open one in Argentina but it immediately failed.”
These Chilean Hooters-for-the-coffee-set seem odd in a country where divorce was only recently legalized and abortion is still illegal. But while there was a definite sexist vibe to the place (Daniela, the only woman in the place not working, admitted she’d never been inside a café con piernas before—“This is a place for men”), I found Café Haiti to be oddly sedate—the men here seemed more interested in their coffee and their conversations with other men than in the women sashaying over to them on high heels while delicately balancing a tray full of beverages. There was no overt flirting, no boisterous joking, no sly winks. Frankly, I’d seen bawdier atmosphere at a corporate cocktail mixer. Which might explain things since at a café con piernas there is also no alcohol. Just a bunch of women who look like they might be backup dancers for the Like-A-Virgin-era Madona serving fairly decent coffee.