The strays of Santiago

Daniela and I were eating sopaipillas in the Plaza de la Constitución, in front of La Moneda, the presidential palace where Salvador Allende supposedly shot himself during the Chilean coup of 1973 (there has always been controversy over whether Allende committed suicide or not, largely because his death came from an AK-47 assault rifle, given to him as a gift by Fidel Castro, which seems like an odd way for a physician to kill himself, don’t you think?).
Anyway, we’re having some street food and looking at the palace, trying to figure out which parts had been destroyed by bombing during the coup, when BAM! a wild beast came out of nowhere and snatched my fluffy sopaipilla right out of my hand.
“What the hell was that?” I said. Daniela was laughing.
“No, no, it’s okay,” she said. “It’s just one of the street dogs.” 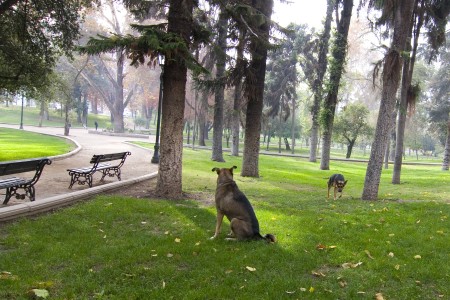 The sopaipilla-snatcher. Photos by David Lansing.

That’s when I noticed there were more strays around the presidential palace than soldiers (and there were a lot of soldiers).  In fact, wherever you go in Santiago, you will stumble across a street dog—sometimes literally. Most of them really are strays but quite a few of them—including a dozen or so around La Moneda—have collars on them, which means they are owned by someone (although Daniela says this can also be a ruse; evidently the government decided a couple of years ago to get rid of all the stray dogs in the downtown area around the palace, decreeing that any mutt without a license and collar would be picked up, so people went around putting bogus collars on strays to make it look like they were pets).
Stray dogs are like mosquitos; once you become aware of them, it seems like they’re everywhere. And in Santiago, they kind of are. There are a couple of reasons for this. For one, as in most Latin countries, Chileans seem to think that “fixing” an animal just isn’t right. God created cats and dogs to go out and procreate, so for god’s sakes, let them fulfill their biological destiny.
Secondly, Chileans think it’s mean to keep a dog locked up in a house all day. So even if the German shepherd that stole my sopaipilla is someone’s pet (and he certainly looked too healthy to be living on the streets), most likely he was let out of the apartment to go out and play with the other doggies when his owner went to work in the morning.
I know, weird, huh. 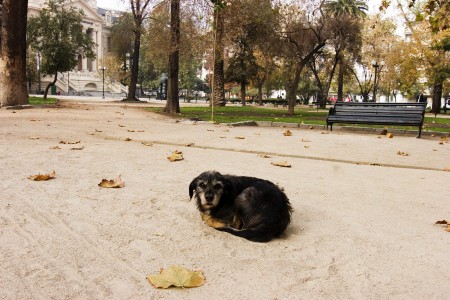 Do you think he’ll bite if we pet him?

So now I see street dogs everywhere in Santiago—chasing each other in Parque Forestal, snoozing in the doorway of an ice cream shop, wandering in packs around Plaza de Armas. But here’s the thing: They seem pretty meek. And, as I said, for the most part they look pretty well-fed (several times I’ve seen garbage collectors or park maintenance employees putting out bowls of food for the animals). It’s like everyone in Santiago has decided that all the stray dogs are communal pets and so everyone has a little bit of a responsibility to feed and take care of them.
Which includes, I suppose, letting them eat my sopaipilla. I just wish next time they’d do the traditional begging routine instead of dining and dashing.