Not everyone in Sardinia is keen these days to break out the brocade vest and puffy pantaloons and do the Round Dance, but Vincenzo Atzeri and his family still like to give it a go. The trouble is that Vincenzo needs to round up a dozen or more dancers to join them, and they all need their costumes as well, and then they need to find a couple of guitar players, maybe someone who’s handy on the accordion, and someone else who knows what to do with a launeddas, an ancient three-pipe wind instrument that is sort of like a bagpipe without the big pouch underneath.

But Vincenzo, who, if he had a beard, would be a dead ringer for Santa Claus, is one of the few people left on Sardinia who not only does a mean Round Dance but also has friends who play the accordion and the launedda. What are the odds?

So he invited us to his house in Maracalagonis for an evening of Round Dancing and some of Mrs. Atzeri’s classic culungiones, which are large homemade ravioli stuffed with potato puree, mint, onion, and some pecorino cheese.

The Atzeri family lives in a big complex that looks like it could have been a convent or something at one time. From the street you don’t really get any idea of the size of the place, but once you walk through the portico, the place opens up like a little city. When I arrived, Vincenzo was spreading branches of myrtle and mint and thyme on the cobbled courtyard (a nice little thing they do so that it smells good when you’re walking around) while a couple of cooks, under his wife’s direction, were making the culungiones. They showed me how to do it and I gave it a try but it’s harder than it looks. I was always putting too much or too little filing in the ravioli and then I could never quite get the proper technique down for folding over the corners of the pasta. 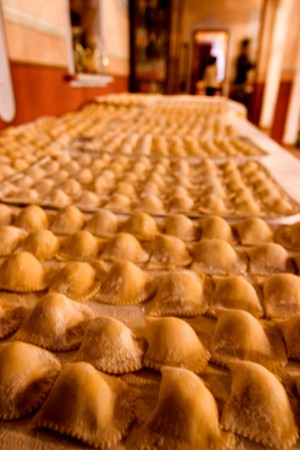 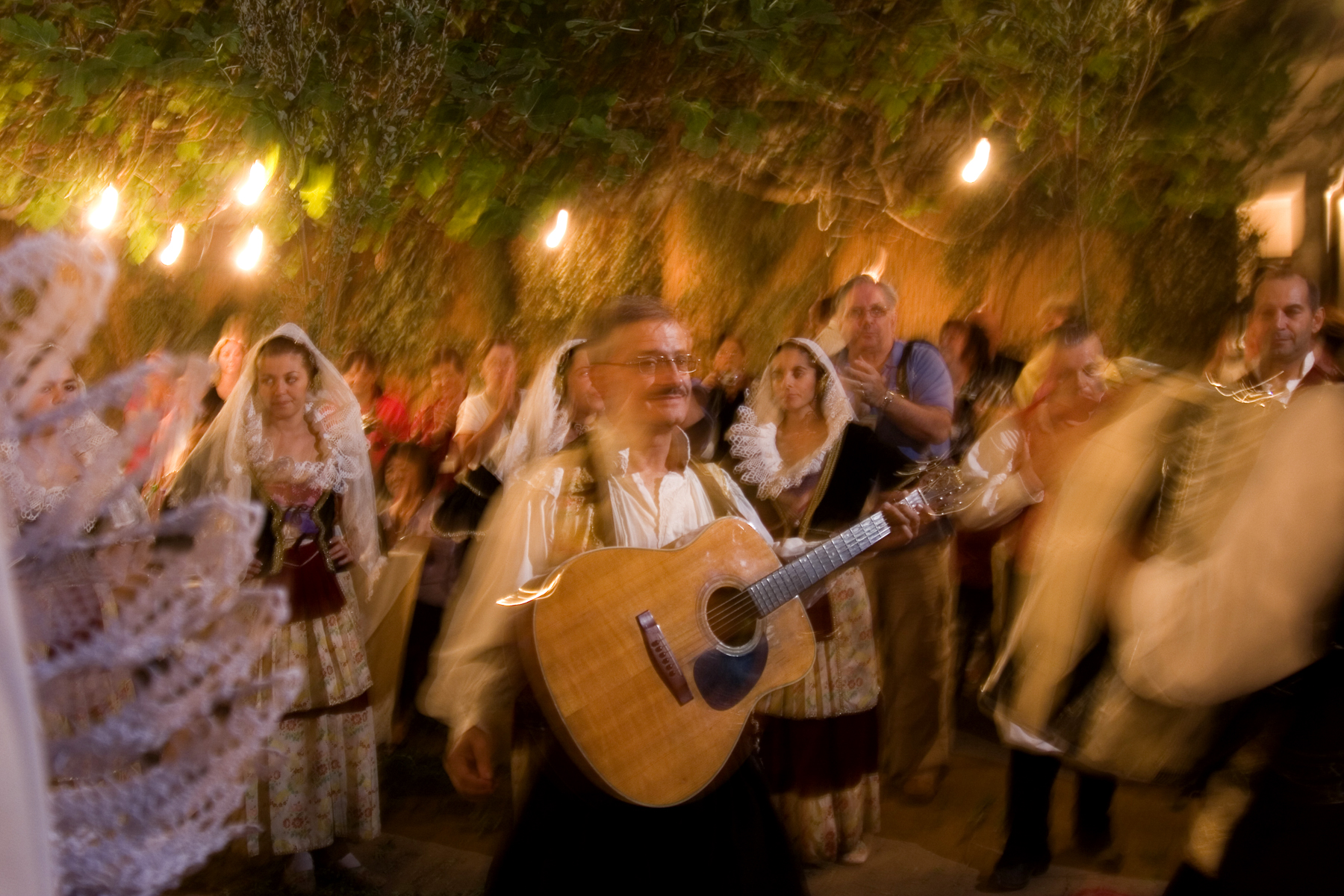 We sat at long tables in a walled courtyard shaded by green vines. In the corner was a big firepit and two guys were roasting porceddu over myrtle wood. We ate, we drank lots of Vincenzo’s rosso, and then the accordion player started playing and a guitarist caught on and next thing you know, people were moving tables and chairs out of the way and doing the Round Dance. I don’t know what I can tell you about this except that it seems you stand in a circle (I guess that’s why they call it a Round Dance), and sometimes you clap and sometimes you hold your neighbor’s hand, and you move around in a circle one way and then reverse course for no discernible reason—sort of like the mating dance the flamingoes do. Which come to think of it is maybe where the Sardinians got the idea. In which case they should have called it the Flamingo Dance, don’t you think?