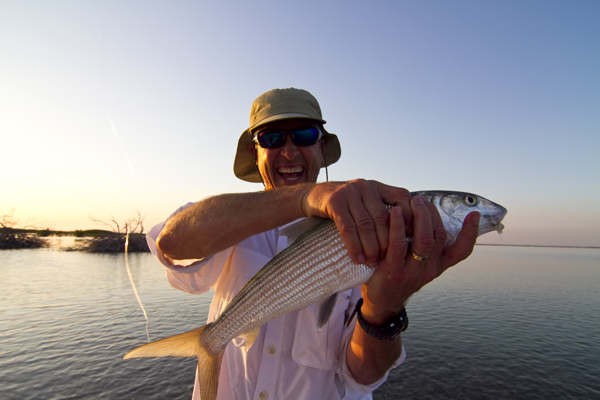 Greg brings in a bonefish just before sunset. Photo by David Lansing.

By the time we anchored Saturday afternoon it was close to four o’clock. That doesn’t leave much time for fishing, but there is just something about that first day on the water—the crispness of the air, the golden color of the light, the song of waves slapping the boat—that makes you want to get out there and toss a fly even if you don’t catch anything.

I’d asked Keko, the Saltwater Fly-fishing Buddha God, to rig my gear for bonefishing while we were still traveling out to the Jardines de la Reina. He’d tested the line and put on a new leader and tightened the drag. He asked for my box of flies and I gave them to him, silently remonstrating myself for not getting new flies for this trip or at least sharpening the hooks of my old ones. There is nothing worse than hooking into a fish and then loosing them before they get to the boat because the hook is dull or the line frayed.

Greg is even more conscientious about his equipment than I am and he was also ready to go the minute Eric, the Avalon’s captain, turned off the engines, so the two of us partnered up and gathered our bone rods and a single tarpon rod along with our fly boxes and tack gear and climbed into Keko’s Dolphin skiff, waving to the others on the stern of the boat as they scrambled looking for rods and hats and cameras. I like being the first away that first afternoon. There is no advantage to it; fly-fishing is about skill but it is also about luck and it was quite possible that we’d be the first to toss a fly at a bonefish and the last to catch one. You could never tell. Still, just the thought of being the first ones on the water and knowing that, even if only for 15 or 20 minutes, we had all of the Jardines to ourselves was invigorating.

I have been here before. Many times. Still, it is always as if it were for the first time. You can always remember the feel of flying through the shallow water of the mangroves in the skiff and the smell of saltwater spray and the beauty of watching a blue heron rise up out of the shallows and gracefully fly next to the skiff for three or four minutes before veering back into the shelter of the mangroves, but those are just memories. It’s like remembering Christmas three years ago. You can almost certainly do it, but it is not the same as when you are there and you are living it. And that’s the way Greg and I felt. We were there in the moment.

Neither one of us spoke. I was sitting towards the rear of the skiff next to Keko and Greg was sitting up front in the jump seat and he might turn his head back towards me as an osprey dove into the water, just to make sure I’d seen it, and I would nod and smile and he would smile back and there was no need for words about what we had just seen or how we felt about it.

While the first afternoon of fishing is always the most lovely, it is not always the most successful. There is the fear when Keko spots the first school of approaching bonefish and tells you to cast “eleven o’clock, fifteen meters…more right, more right, my friend” that you will only get the line out ten meters or you will throw the fly on top of the bonefish, spooking them, or worse yet, you will have forgotten how to bring the line back behind your head smoothly and easily, waiting for the line to load, and instead you will rush it, lofting the fly up into the air where it will puddle and drop straight down like a snowflake just feet in front of you.

This is what you fear and you fear it for good reason because no matter how good a fly-fisherman you are and how easily you made this same cast the last time you were in the Jardines, that was then and this is now and your muscle memory seems to have forgotten everything it learned before and it betrays you in ways you could not imagine. And then it is up to Keko to be patient and calm you down and help you get back in to your rhythm.

And it does get better. But it takes awhile. And meanwhile you’ve scared away the largest school of bonefish you’ve ever seen in your life and not come close to casting properly at several others that swam by oblivious of your attempts to present them with a suitable fly and now the sun is just holding up over the horizon waiting for you to do something, to catch that first bone, so all of you can call it a day.

And then it happened. Quickly, unexpectedly. Keko spotted a bonefish 15 or 20 meters to the left of the boat, towards shore, and Greg had to cast as far as he possibly could, into the wind that was blowing lightly off from the islands, and he stripped the line and there it was, the hit, and Keko was yelling, “Bonefish! Big one!” and the fish ran and Greg took his hand off the reel and let the line go out, badly afraid that the fish would wrap the line around the coral or just snap it off, but reminding himself to keep his pole up, pointed at the fish at it ran, turning him around when he was taking out too much line, quickly reeling in when the bone tried to catch his breath, letting it run again, far, far, farther, until he was sure that he’d run out of line, and just then the bone stopping and Greg able to reel in as fast as he could, the tip of the rod high, and then it was at the boat and Keko was lifting it up and into Greg’s hand.