The Ends of the Day

As we made our way back to Avalon I, we came across Fletch and Nick wading in the shallows. Their guide, Jimmi, was fishing with Nick and Fletch was maybe a hundred or so feet in front of them fishing by himself. It is a thing of beauty to watch Fletch fish, particularly when he is out of the boat and standing in knee-deep water throwing a line sixty or seventy feet. There is an ease in his body and a natural rhythm to his movements that you see in any natural athlete no matter the sport. When he is standing on the nose of a skiff fly-fishing he can sometimes look awkward and stiff, but when he is by himself in the water he is as natural a fisherman as a white egret. Sometimes when I am with him and I am also standing in the shallows fishing, maybe only fifty feet away, I will stop and watch him the way one would stop and watch a great basketball player if they were shooting hoops by themselves on a school-yard lot.

When Jimmi saw us slowly passing by he got on the skiff’s 2-way and had a garbled conversation with Keko. Even if you know Spanish well it is almost impossible to tell what the guides say to each other over the 2-way radios. Maybe they speak in code or perhaps they just have their own separate language, like twin babies. I do not know. I just know no one else can understand them. 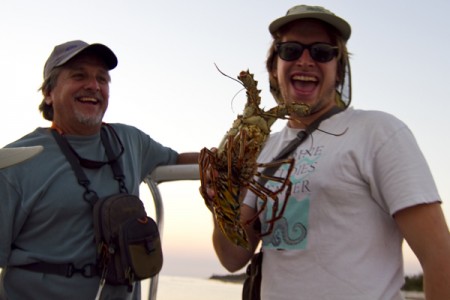 Fletch and Nick with the lobster Jimmi caught. Photo by David Lansing.

After the conversation, Jimmi went running back down the beach, away from us, and Fletch and Nick waded over to our boat. We gave them a hand and they climbed in. Nick said that while he and Jimmi were fishing together a large lobster had scooted by next to their feet and Jimmi had reached down and grabbed it and then stashed it somewhere in the shallows weighted down by some stones. That is why he’d gone running back down the beach. To retrieve the lobster.

We told them how Greg and I had each caught a single bonefish, how they were good size, as good as you could wish for on your first day in the Jardines, and Nick, who had never been saltwater fly-fishing before, told us how he’d hooked a couple of bonefish himself but hadn’t been able to land them. Still, he didn’t seem the least bit upset about it. I think he was happy just to be here fishing with us and to have seen the fish and to have been able to properly get several of them to take the fly. We had only been in the Jardines for a few hours and we had the entire week ahead of us so it was not important whether you caught anything or not today. That would come. For now it was enough just to be out on the water with the fish running and the sun slowly setting off on the horizon.

Fletch had actually caught two bonefish fishing by himself. He’d also seen many tarpon and had hooked three of them but, because of nerves, had held the rod too high and not put the end down on the water as you have to do when the tarpon jump and had lost them. Like Nick, he wasn’t upset about losing the fish either. It was an extraordinary afternoon, the weather as good as one could hope for with almost no wind and there was no need to worry about losing a few fish. It was not important.

Once Fletch and Nick were in the boat with their rods, we pushed off from the shallows and motored along the beach until we saw Jimmi. He waded out to us and handed the lobster he’d caught to Nick. It was a good-sized lobster, missing its antennas, perhaps when Jimmi had caught it or perhaps from the way he’d trapped it afterwards. We motored back to Jimmi’s skiff and Fletch and Nick and Jimmi got out and then, just as the sun was disappearing into the ocean, we all headed back to Avalon I.