More on kalimotxo and botellones in Madrid 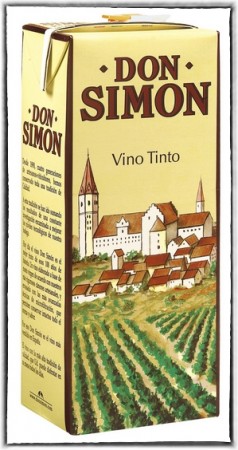 The go-to box wine for making a kalimotxo in Madrid.

In talking about kalimotxo cocktails and the mass street parties in Madrid called botellónes yesterday, I failed to mention several important details. First, I learned about both from my friend Lisa Abend, a writer who has lived in Madrid for many years. She mentioned kalimotxo in a really brilliant story she recently wrote for AFAR magazine on the San Fermin festival in Pamplona (you can read the article here) in which, as part of her “Survival Guide to San Fermin,” she recommends that you “Don’t drink more than three kalimotxo in a row. Trust me.” I can second that. In fact, I’d advise that you never drink more than one kalimotxo (and be sure you’re under 30 if you do).

As I was writing my piece on kalimotxo and botellónes (if you don’t know what I’m talking about, read yesterday’s blog), I e-mailed Lisa and asked her if she thought botellónes were dying out in Madrid. She said no. “Actually, it’s stronger than ever, thanks to la crisis. No one in Spain is going to actually give up drinking; they’ll just do it in the street, with litronas and those nasty boxes of wine, instead of paying to go to a bar. Public drinking is illegal (if you’re not seated at an outdoor café, which since the smoking ban went into effect, has become a meaningless distinction as every bar in the city sets up tables on whatever meager piece of sidewalk they can find. The entire city looks like a fucking food court these days) at all hours, not just after ten. Cops show up every weekend to the botellón outside my apartment and stand in one part of the square. People who want to drink get up, walk ten meters around the corner, and resume their drinking there. It’s a very efficient system.”

Lisa’s e-mail reminded me of something else I forgot to mention yesterday: The legal drinking age in Spain is 18 and it’s illegal to drink in the streets of Madrid after 10pm. Which is pretty funny since a botellón never gets started before 11 or so. My experience has been that the police aren’t as concerned with the drinking (or the age of the drinker) as much as they are about littering and noise. So if you throw your shitty Don Simon Tetra Paks in the trash and keep your voices down, it’s generally not a problem.