Nambawan at the War Horse Saloon 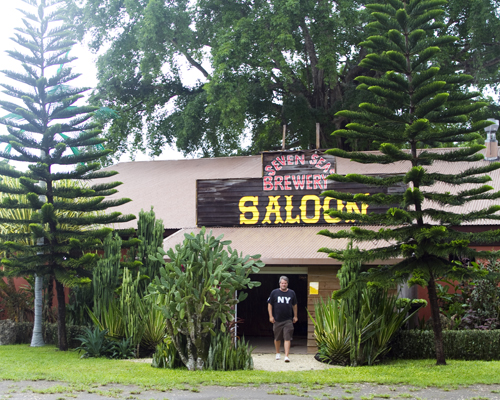 We had to be packed and ready to go this morning by eight. I said good-by to Martha and Terrine, who have been so lovely to us each morning, and then loaded my luggage into the small motorboat for the thirty-minute trip over to Luganville for the short flight to Port Vila.

Once here, I had several hours before my flight to Auckland so I decided to drop in on the War Horse Saloon which every one on the island just calls The Saloon.

The Saloon is owned by Don and Donna MacQuid, a couple of ex-pats from Denver who thought they’d take a break from life and go sailing for a couple of years. That was in 1984.

“We ended up sailing around the world—twice,” said Don who was wearing a floppy cowboy hat and drinking a Nambawan, a draft beer he brews on the premises (say the name of the beer slowly and you’ll understand what it means). 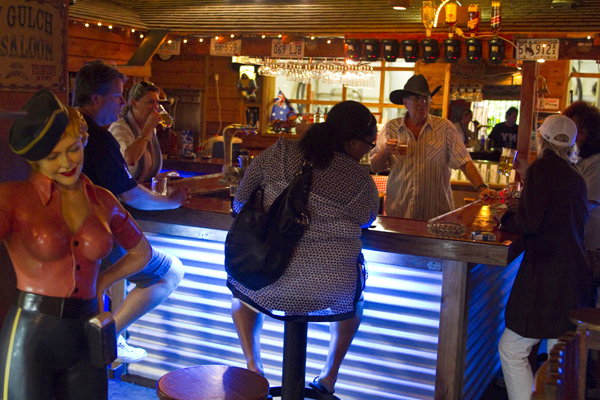 Don, in cowboy hat, shares a Nambawan with patrons. Photo by David Lansing.

I asked them how they ended up owning a brewery and saloon in Vanuatu, particularly one that looked remarkably like the Traildust Steakhouse in Arlington, Texas with its stuffed buffalo heads and big-screen TVs playing sports, and Donna chuckled and said, “Well that’s a long story. You got all day?”

Here’s a brief version: They were on their boat, Solitaire, headed for the Solomon Islands when they heard there was a cyclone in the area so they changed course and headed for Vanuatu instead. “Once we got here, we never left,” she said.

Don had always wanted to make beer so he thought he’d open a brew pub in Port Vila but the government wouldn’t have any of that. “They are half owners in Tusker (the local beer in Vanuatu) and they wouldn’t allow me to build a brew pub. So I sued them. Which was kind of a crazy thing to do but it got their attention. Eventually they said I still couldn’t open a brew pub but I could open a brewery which is what I did. And then in 2006, we just happened to open the War Horse Saloon right in front of the Seven Seas Brewery and a couple of years ago, we started selling our Nambawan beer in Vanuatu to compete with Tusker.”

And then Don had to excuse himself. He said he needed to help a local country band set up for tonight. I asked him where he found a country and western band in Vanuatu.

“Oh, they’re natives,” he said, adding, “I think ni-Vans are the most naturally talented people I’ve ever met. People wonder where I find a band in Vanuatu that can play Willie Nelson and Johnny Cash and I tell them, Well, you just find some local musicians, give them a couple of western CDs and a week to rehearse and you’ll swear they grew up in Memphis.”

With that he headed off and I finished up my Nambawan before catching a taxi for the airport.