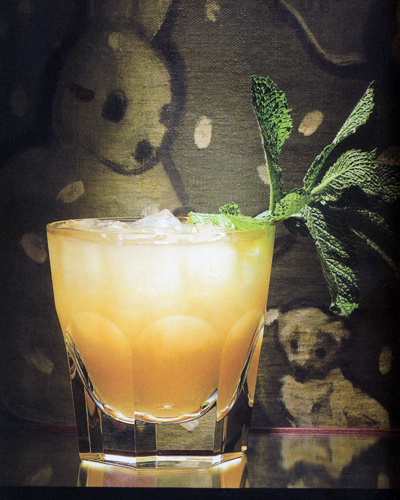 I missed the Kentucky Derby this year which is just as well since I’m not a huge fan of Mint Juleps which, to me, taste like a child’s version of bourbon, if such a thing is possible. Like marzipan and fudge, the julep is just way too sweet for me. What it lacks is some sort of tart component to balance out all that sugar and mint. Which is why I much prefer a cocktail invented by the King of Cocktails, Dale DeGroff, called the Whiskey Smash, which is very much like a Mint Julep except better. Much better.

Now I say that DeGroff created this drink and maybe he did, but the Whisky Smash has a long history although, like a lot of cocktails, the exact ingredients have changed over time. Jerry Thomas, who is generally considered the patron saint of bartenders, briefly mentions a Whiskey Smash in his landmark cocktail guide, How to Mix Drinks, or the Bon-Vivant’s Companion, first published in 1862.

“This beverage is simply a julep on a small plan,” he writes, and then lists the ingredients as 1/2 tablespoon sugar, 1 tablespoon water, and 1 wine-glass of whiskey.

Well, okay, we get the idea: bourbon, mint, and sugar. A bit anemic, that.

Flash forward to 2005 when Bobby Flay opened Bar Americain in Midtown Manhattan. One of the most popular drinks on the cocktail menu was a Whiskey Smash, which was quite different than the Thomas concoction. To whit, while muddling the mint with simple syrup, Flay added a couple of lemon wedges and smushed those up to get some of the juice as well as a little of the lemon oil (think bitters). Then ice, add the bourbon, and—this is a bit unusual—top the whole thing with a splash of soda.

Did DeGroff come up with his version of the Whiskey Smash before or after Bobby Flay? Who can say. What we know is that his version calls for Makers Mark Bourbon, three lemon pieces, five mint leaves (five: not four, not three—five) and no soda. The version they serve at Bemelmans Bar in New York City’s Carlyle hotel, which credits DeGroff as the creator, insists on Bulleít Bourbon, which I quite like, and lemon juice instead of muddled lemons. I don’t know. I could go either way on the lemon issue. On the one hand, muddled lemons do give you that slightly bitter lemon oil which I find quite nice, but just using fresh lemon juice makes the drink a little smoother I think. Maybe try it both ways and see what you think. 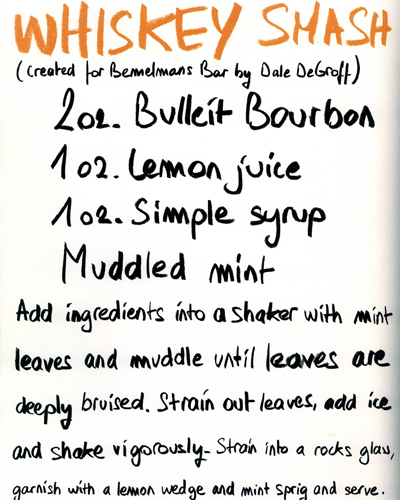