We had coffee at a little outdoor café in Palma Rubia, waiting for our taxis to arrive. Every so often one or the other of us would stand in the middle of the dirt road, looking up the valley to see if anyone was approaching. When the three taxis finally did arrive, it was with great flair. They came roaring down the red dirt road, dust flying everywhere, and came to a screeching halt in front of the café. What an entrance. It was as if John Wayne and the cavalry had just arrived to escort us through Indian territory.

While we’d been waiting, a Cuban guy in his mid-20s had been ingratiating himself to us, giving us “insider” tips on which restaurants to go to in Viñales and such. Once the taxis arrived, he offered to give us a tour of what he said was his family’s tobacco farm in exchange for a lift into Viñales. 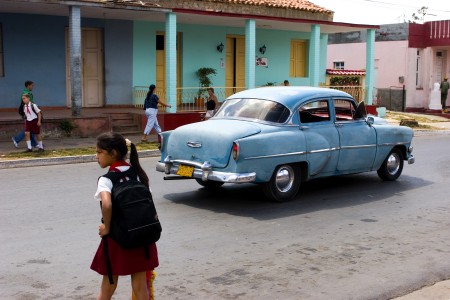 This was a bit trickier than it sounds because Cubans can get fined for traveling with tourists. Our taxi drivers didn’t want anything to do with this arrangement. But we convinced them that the Cuban was our official “guide” and reluctantly they agreed to let him come with us.

Once we got to Viñales, we instructed the three drivers to wait for us near the main square, the Parque Martí, while we followed our new Cuban friend out into the countryside. None of us had the faintest idea where we were going (or for how long we were going to have to walk). It didn’t matter. It was pleasant passing by the panaderia (which had maybe a dozen hard rolls, at most, for sale) and saying hello to the the women carrying sun umbrellas as they brought their children home from school for comida. 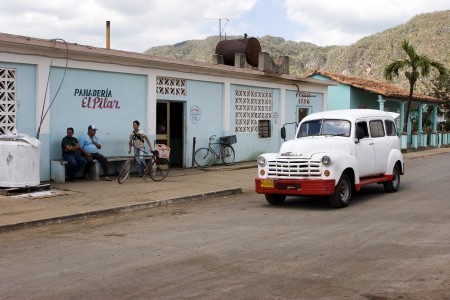 Eventually we made it out into the tobacco fields where the bright green plants, no more than two-feet high, were growing in long rows. In the middle of the field was the storehouse, called the casa del tabaco, where the harvested leaves, tied in bunches, and hung on poles all the way up to the rafters. Our Cuban friend told us that when the tobacco leaves dried they would be sprayed with a mixture of honey and water or cocoa and water as part of the hydrating process so the tobacco wouldn’t become brittle. 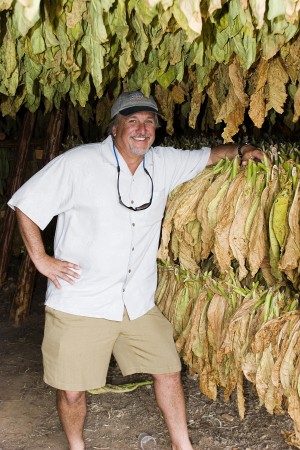 I don’t know. I’d never heard this before. Spraying tobacco leaves with honey? At this point we were all beginning to wonder if this was truly our friend’s family tobacco farm or if he’d just escorted us out into the country and taken us to the first casa del tabaco he’d come across. Maybe he didn’t know a damn thing about growing tobacco and was just making it up as he went along. It was hard to tell.

Hardy, in a very diplomatic way, told the guy we appreciated the tour but now we were all hungry and wanted to get back to Viñales for lunch. Which is when the pitch came. Our friend would be happy to sell us some excellent cigars, the type you cannot get on the market he told us, if we would just follow him to his grandfather’s house. 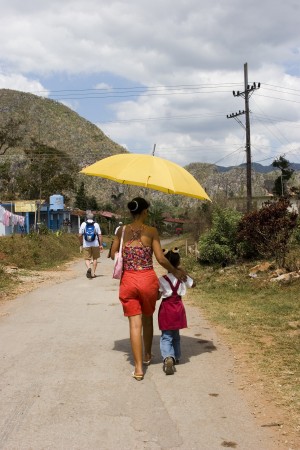 “So this is what Cuban communism has come down to,” Hardy said as we ambled back towards the town square. “Everyone trying to hustle cigars.”

I think our Cuban friend figured out that we weren’t going to buy any of his grandfather’s cigars. By the time we made it back to the Parque Martí, he’d disappeared. Probably just as well. Now we needed to figure out where to have lunch.