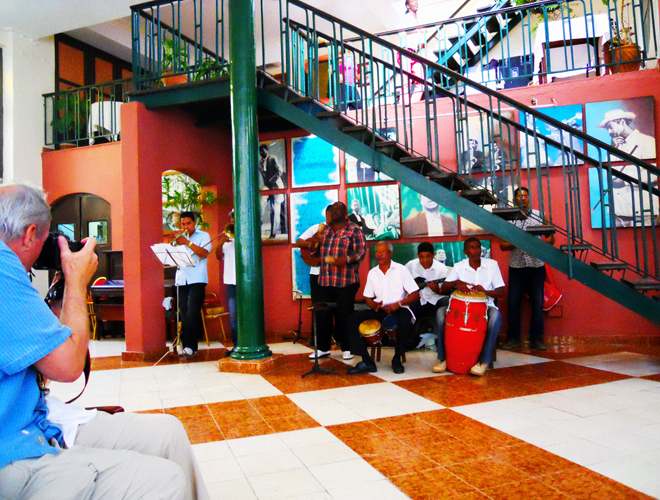 The salsa band at Cafe Taberna. Photo by Greg Geiser.

Everything was a bit out of sorts on Sunday. Neither Cam nor Nick were feeling real great. Maybe from a lack of sleep or too much booze or a combination of both. Who knows. Fletch and Hardy didn’t drag themselves downstairs for breakfast until a few minutes before the restaurant closed. Both looked disheveled and a little saggy around the eyes. I’d gone to bed early Saturday night but because there had been a mix-up in the room reservation and Greg and I only had one bed in the room, I ended up sleeping on some cushions beneath the windowsill. It wasn’t particularly uncomfortable but it wasn’t great either. I woke around five and never went back to sleep; Greg got up shortly thereafter and went for a run in pre-dawn Havana.

So it was decided, when everyone finally did gather, that we’d all kind of do our own thing in the morning and then meet back at the Saratoga in the afternoon and walk down to the Plaza Vieja in the old town for lunch at Taberna de La Muralla, a Cuban brew pub with probably the best beer in Cuba and usually a pretty good house band playing on the veranda facing the outdoor tables. But just before we got to Plaza Vieja we passed another favorite restaurant, the Café Taberna and Cam and Nick stuck their heads inside and noticed that there was a great salsa band playing and so we decided to go here instead. 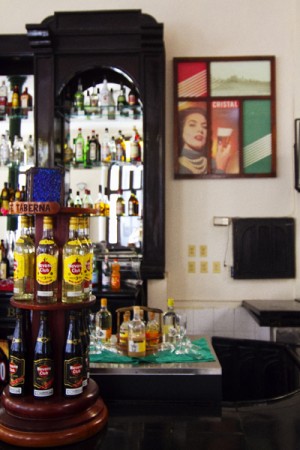 I was happy we chose Café Taberna. While the beer was certainly better at the other place, the food was better here. And I liked the atmosphere. The tables were covered in white linen and the waiters wore tuxedo vests and bow-ties. It was, I imagined, more like the Havana of the ‘50s. We got a nice table right in front of the band and ordered a round of Cristals. It was a proper salsa band with two horn players and six other musicians including a young kid banging away on the tumbadora, the tall wooden and leather drum that drives a good salsa band.

The band was situated beneath the stairs that led to the second floor of the restaurant. On the landing, directly above the band, were two young dancers practicing their salsa moves. They were both very good, particularly the guy. He was a bartender at the restaurant and the woman had just come over to practice with him for awhile to the live music.

The band took a break and we ordered lunch. You would think that after eating seafood three times a day for over a week that we’d want something different, yet even here we ended up ordering shrimp and a mixed seafood plate and grilled snapper with red beans and rice. The salsa band started back up. The restaurant’s hurricane shutters were up and people who were walking by would hear the music and stop, leaning against the open window from the outside and listen to a song or two before moving on. It was all quite pleasant and the perfect way to spend a sleepy Sunday afternoon.

After lunch we talked about maybe taking a horse and buggy along the malecon or walking down to the rum museum, but the sun was hot and everyone felt a little lethargic and in the end we walked back to the Saratogo. Some of the boys went back to their rooms to nap and others went to the business center to catch up on e-mail. I put on my bathing suit and went to the roof of the hotel where the pool was, ordered a mojito and quickly fell asleep in a lounge chair facing the Capitolio. When I awoke, the afternoon was late. Just to get the cobwebs out of my head, I went for a swim. The water was cool and refreshing and I swam up and back several times and then just sat in the shallow end of the pool drinking a mojito and observing the other guests around the pool. It was a perfectly lazy way to spend one of our last days in Havana but it was fine anyway.