A hen party on Bourbon Street 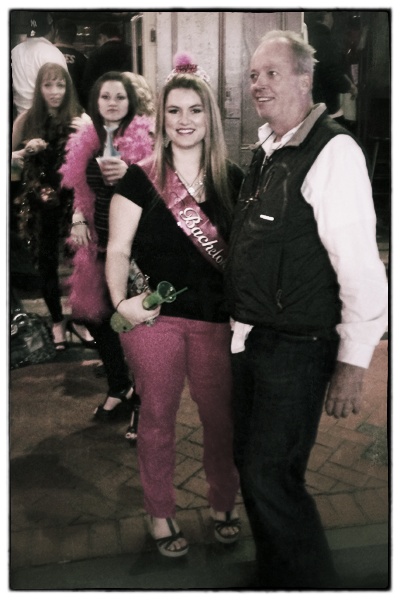 The bride-to-be, her hen party behind her, grabs me for a quick photo on Bourbon Street.

When I first checked in to the Hotel le Marais, there were four or five young women at the reception desk ahead of me. They were all sipping from plastic drink cups with colored plastic sharks on top of drink stirrers. One of the women was wearing a princess tiara.

The woman with the tiara wrinkled her nose. “What?”

“Are you girls here for a hen party?”

The women all laughed. “Well, yeah, but I’ve never heard it called a hen party.”

I told them that they called them hen parties in the UK instead of bachelorette parties.

“That’s kind of cute,” said the gal with the tiara. “I kind of like it.” She took a big gulp from her plastic cup and then said to her friends, “Hey, ladies—we’re having a hen party tonight.”

The girls all giggled.

Anyway, last night after dinner I was wandering down Bourbon Street, which is just a block away from the hotel, when I heard someone yell, “Hey, there’s the guy who told us about hen parties!” It was the group from the hotel.

I went over and said hello. They were all quite drunk. But seemed to be having a wonderful time. “Come over here and have your picture taken with me,” said the bride-to-be who was still wearing her tiara. I went over and stood next to her while one of her friends grabbed my iPhone to take a picture. The bride-to-be put her head on my shoulder and said, “Okay, Emily, take our picture. I’m the hen and this is my cock!”

Everyone laughed. Even me.