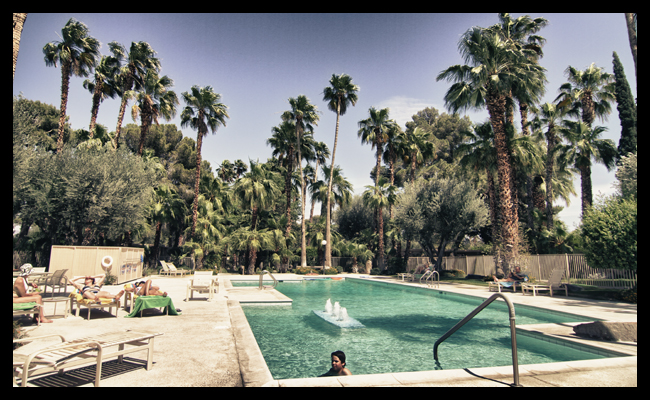 The pool at the Racquet Club Garden Villas, once part of the famed Racquet Club Resort. Photo by David Lansing.

Yesterday morning I was sitting in the sand on the edge of the Pacific watching a small group of middle-aged women taking a stand-up paddleboard class. There was a slight breeze coming off the water, keeping things to a comfortable 75 degrees or so.

An hour and a half later I was in Palm Springs where, at noon, it was 108 degrees in the shade. I am staying in a small garden villa that was once part of the Racquet Club, a resort I’ve written about before that was founded by Charlie Farrell, a character actor from the 20s and 30s whose career was revived in the 50s when he played the worried father of troublemaker Gale Storm in My Little Margie.

Charlie Farrell was quite the bon vivant both in Hollywood and Palm Springs. I guess you could say he was Carey Grant before Carey Grant. 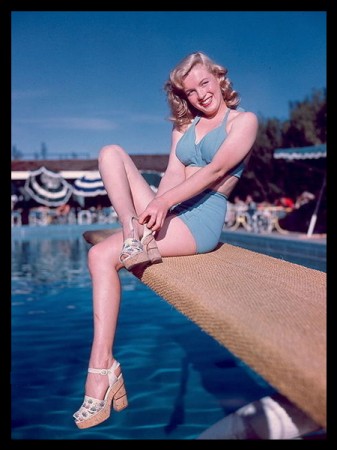 A young Marilyn Monroe, circa 1949, at the Racquet Club. Photo by Bruno Bernard.

Anyway, Charlie, like his beloved Racquet Club, became a bit of a mess after his wife died. But I remember going out there in the 80s, a few years before Charlie died, and it was still something to see. You’d walk into the Racquet Club, where Bing Crosby used to play bartender, and see all these old publicity photos on the wall: Marilyn Monroe, in a robins-egg-blue two-piece bathing suit sitting coyly on the end of a diving board; Spencer Tracy playing chess with Charlie; Kirk Douglas catching a breather between sets of tennis. There were shots of Rock Hudson and Tony Curtis and Joan Crawford.

Now there’s a low wall between my condo and the old Racquet Club, which has been deserted for years. From my courtyard, I can still see the old Bamboo Bar and the boarded up buildings that used to be the famous bungalows nestled around what used to be the verdant Mission Garden but is now just a dusty, weedy lot. A few years ago there was an ambitious plan to bring back the Racquet Club to its former glory. Infrastructure was built. Some of the historic Albert Frey bungalows restored. Then the market crashed and construction stopped dead. Now I hear the homeless often break into the old bungalows and crash there until the police run them off. Like Charlie Farrell’s last years, an ignoble end for a once magnificent desert character.