Looking for a Stupidity potion at the Voodoo Shop 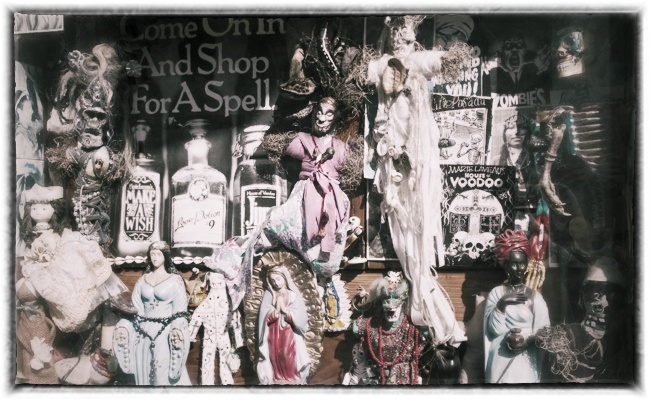 The display window at the Voodoo Shop in New Orleans. Photo by David Lansing.

I was walking around the French Quarter, over by Preservation Hall, not really looking for anything in particular when I came across the Voodoo Store. They had a display case out front full of skeletons and statues of the Virgin Mary, bottles of love potions and packets of herbs, charms, beads—all kinds of things. Up at the top was a sign that said Come On In And Shop For A Spell.

Well, I was intrigued.

There was so much weird stuff inside this shop I don’t even know where to begin. On a wall in the back were dozens of little bags of herbs and seeds and stuff for various spells and potions. There was stuff for finding love, losing love, and getting revenge on love; potions for finding lost dogs, lost loves, and lost hair; packets designed to bring you wealth or happiness or good luck.

A very large woman standing by the counter asked me if there was something in particular I was looking for.

“Well, I’m not exactly sure what kind of a potion I’m looking for.”

“Then let me help you. Does it have something to do with love…that’s our most popular.”

“You got enemies then?”

“Well, not exactly. It’s more like I’ve got these friends, see, that are…”

“Well, they’re stupid I guess is the best way to put it.”

“Stupid in that they just say stupid shit and don’t even know they’re saying it. You know, about the government and the president and stuff like that. They mean well, but…well, I don’t know how else to put it—they’re what you might call educated Crackers.”

“I know the type perfectly well.”

“They sayin’ all the time that we’re the greatest country in the world and all like that, but then they just can’t help demeaning people. Makes no sense to me. These are the sort of people who are always saying, “Don’t get me started,” but the problem is you can’t never shut them up. And they don’t have a clue as to what they’re saying. They just like to rant. Know what I mean?”

The woman laughed and said she knew exactly what I meant.

“So then,” I said, “you got any sort of a spell that might work on people like that?”

“No, sir,” she said, shaking her head. “I’m sorry I don’t. It’s easier to cure a bitch with ringworms than a stupid cracker.”

I nodded and then bought a potion for Peace. Maybe I’ll spread some of it on my friends’ dinner tonight when they’re not looking. Not that I think it will do much good.

Champagne and fries in New Orleans 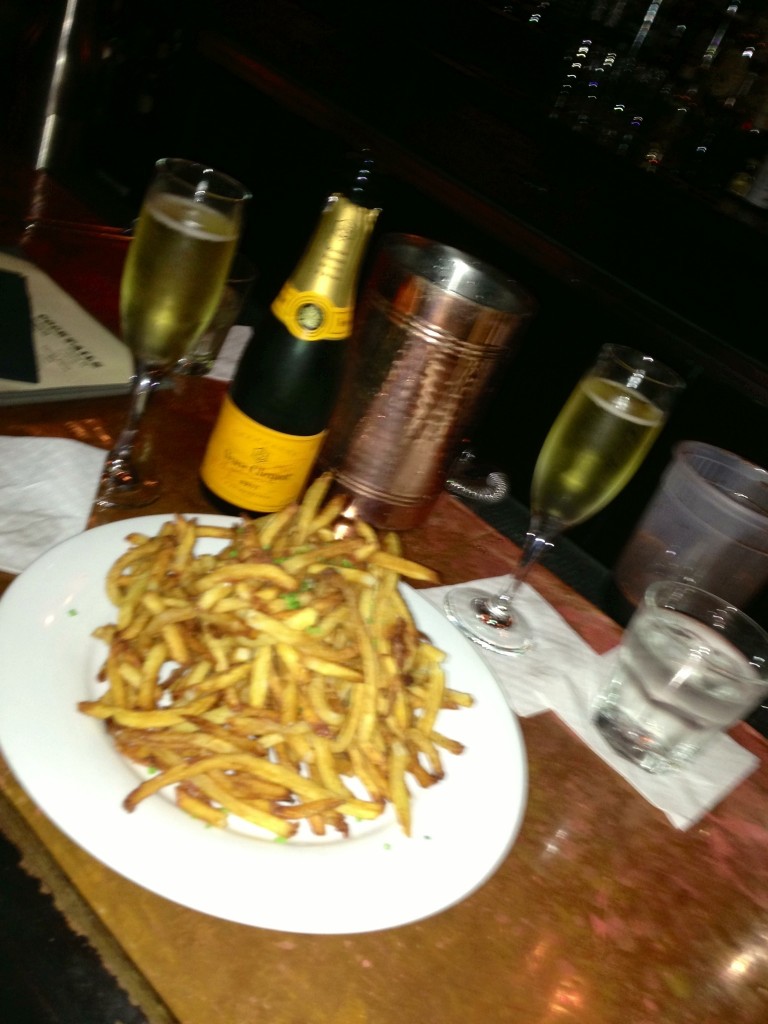 The photo above is crap (it was dark and I was using my iPhone) but what you’re looking at is a bottle of Veuve Clicquot and a large plate of french fries, which I ordered last night at Sylvain on Chartres Street in the French Quarter of New Orleans. This wasn’t a strange marriage between haute and poor that I made up; this is something that is actually on the menu. Right there on the bar food menu. Veuve Clicquot and fries. $50.

Is there any other city in the world where you could find Veuve and fries on the menu? I think not. God bless you, New Orleans, for knowing one of my fantasies even before I did.