Taking in the Mississippi–for the first time 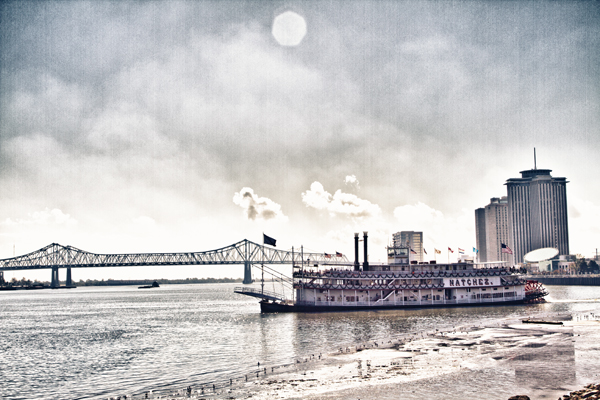 A view of the Mississippi across from Jackson Square. Photo by David Lansing.

The Mississippi is well worth seeing, wrote one of my literary heroes, Mark Twain. “It is not a commonplace river, but on the contrary is in all ways remarkable.”

Yesterday morning I woke up and while I was looking at the paper and sipping my coffee in the bar of the Hotel le Marais, decided I was going to walk over to the Mississippi River. Not that this was any big deal. The river is just four blocks away, although I doubled the distance by heading for Jackson Square and then crossing the train tracks to the Vieux Carré Riverview.

I sat down on a park bench and looked around. In addition to the joggers and strollers, there were three drunk young Goths singing gibberish a capella; a disheveled man facing the river preaching out loud to himself or to the audience in his head; a tiny blond saxophonist, blowing the blues, who made me think of Lisa from The Simpsons; a young woman wearing a bikini and tanning herself along the banks of the river, despite the fact that it was windy and cold out; several individuals with big smiles and dirty hair asking for spare change; an extended Vietnamese family spread out on several blankets having a picnic; lovers, some holding hands, others passionately kissing, one couple yelling at each other; and my favorite—an old man in a black cords and a green jacket, a porkpie hat on his head and an ebony walking stick at his side, reading aloud from Huckleberry Finn:

“Two or three days and nights went by; I reckon I might say they swum by, they slid along so quiet and smooth and lovely. Here is the way we put in the time. It was a monstrous big river down there – sometimes a mile and a half wide; we run nights, and laid up and hid daytimes; soon as night was most gone we stopped navigating and tied up – nearly always in the dead water under a tow-head; and then cut young cottonwoods and willows and hid the raft with them. Then we set out the lines. Next we slid into the river and had a swim, so as to freshed up and cool off; then we set down on the sandy bottom where the water was about knee deep, and watched the daylight come. Not a sound anywheres – perfectly still – just like the whole world was asleep, only sometimes the bullfrongs a-cluttering, maybe.”

Sitting there along the banks of the Mississippi, watching a paddle-boat slowly make it’s way up the river, seeing the river all wide and smooth and lovely, I reckon it was as dramatic as anything you’d see at the opera. Or even NASCAR.

A new way to look at Jackson Square in New Orleans

One of my favorite photography blogs is Münchow’s Creative Photo Blog. As you might guess from the title of his blog, Otto von Münchow doesn’t write about the technical aspects of photography so much as the creative part (his tag line is “Creativity is within us all.”) A lot of what he writes about concerns how to really “see” when we take photographs. And how it helps if we take different pictures from what we usually do. For instance, for a recent project in which he went in to his backyard to shoot rather common settings—a wrought iron bench, a gathering of leaves, some old garden furniture—he writes about expanding his vision by shooting in different ways: “It could be shooting with an unfocused lens, using long, handheld exposure time for blurry imagery, or it could be putting a 400 mm lens on the camera, using minimum depth of field, or something absolutely crazy. Again, the point for me is to expand and challenge myself so that I don’t get stuck in my present photographic vision.”

I love this idea. And he’s right. I don’t have my usual quiver of lenses and such with me here in New Orleans, but yesterday when I walked around Jackson Square, I decided to take advantage of a single lens and just try and look at things differently. To try and see the world through a slightly different perspective. It’s not so much that I was trying not to “get stuck in my present photographic vision,” as Otto says, but not get stuck in my emotional and intellectual vision of the world around me. In other words, maybe by looking at the world in a slightly different frame, I’d see and feel things that I wouldn’t normally. And that’s, I think, exactly what happened. Like I said, some guys were playing music in front of the St. Louis Cathedral. They were playing jazzy versions of Christmas songs. “Santa Clause Is Coming to Town,” “Frosty the Snowman,” that sort of thing. Even though they were all playing the same song, they weren’t playing together. It’s like the saxophone player knew one version of Frosty and the trombonist knew another and the tuba player and guitarist knew different versions. They didn’t seem to care that they weren’t in sync. They were just doing their own thing. Together.

The saxophone player saw me watching them and told me to come sit down. “Come on, now. Come join us.” He patted the empty spot on the park bench between him and the trombone player. I sat down.

“You sing?” asked the saxophone player.

He counted down and then launched into an up-tempo version of “Let It Snow.” When they got through the opening, he turned to me and nodded. I sang.

The trombone player shook his head and laughed. So did the tuba player. But the saxophone player just nodded his head at me and kept on playing.

The girl inside St. Louis Cathedral I was supposed to go fishing with some of those knucklehead crackers I was talking about the other day but I just couldn’t do it. Made me sad to even think about. Instead, I got up late, had two cups of coffee down in the bar of the Hotel le Marais, and then walked down to Jackson Square. Some guys were playing music in front of the St. Louis Cathedral. I listened to them a bit and then I walked in to the cathedral and sat down in one of the pews in the back. In the aisle was a group of high-school-aged Catholic school girls wearing blue, long-sleeve blouses, listening to a tiny little nun who spoke in a whisper. I couldn’t hear what she was saying. But the girls in their crisp blue blouses would crane their heads in unison following the tiny nun’s uplifted arm as she pointed to a painting on the dome of the cathedral or maybe one of the flags hanging down.

A tall, pale, gangly girl with a ponytail tied with a white ribbon, yawned, with exaggeration. “Jesus,” she drawled and then clapped a hand to her mouth as her eyes got big. The other girls all tittered and spun to face her. The little nun looked hard at the gangly girl but didn’t say anything. “I’m sorry, sister. It just came out!” said the gangly girl.

A few of the girls, tired of standing, sat precariously at the edge of the pews, as if prepared to jump up at any moment. One of the girls saw me watching them and stuck her tongue out at me and then quickly turned around. An elderly couple, whispering to each other, sat down in the pew five or six feet away from me. The woman, who had a tight bun of white hair piled on her head and was wearing a puffy purple jacket, had one hand on the old man’s arm and was talking to him rapidly in French while he slowly nodded. Something she said to him made him very sad for his eyes got moist and he took out a perfectly pressed white handkerchief and handed it to the woman who dabbed at the corners of his eyes, as if he were a child who’d gotten sand in them.

I don’t know why, but I kneeled. I clasped my hands as if I were going to pray but I wasn’t praying. I was thinking of someone I knew and I then I started to wonder why I had started thinking about that person, since I hadn’t thought about them in a long while—no, that was a lie. And then I realized that the tall gangly girl who’d murmured “Jesus” after yawning reminded me of her. Not in the way she looked or anything but just by the way she stood there. All loose limbed. Like something just awakened. Like a cat stretching on her way out the door.