The best little town in Idaho 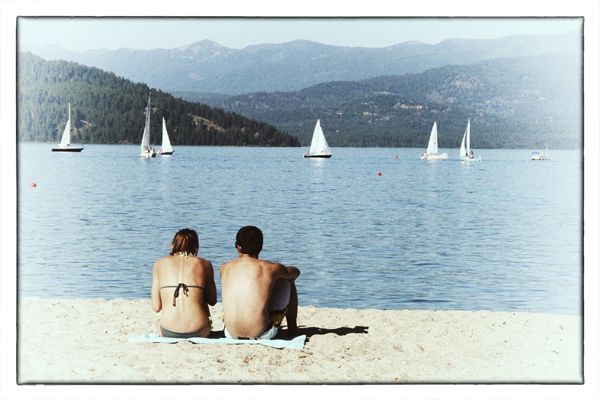 Summer on the lake in Sandpoint, the best little town in Idaho. Photo by Katie Botkin.

A Letter from Katie Botkin in Idaho:

On Thursday nights, there’s this phenomenon called dollar beers at Eichardt’s, the local pub and one of my favorite pubs ever. They tap a keg, and everybody gets whatever microbrew it happens to be. Several pints, usually. I often try to limit myself to one, but that doesn’t always happen. Once you’ve been going there for awhile, you can walk in by yourself and find at least one other person you don’t mind talking to for a couple of hours. It’s like church. Actually, some people even call it church. People tend to be very generous when a pitcher costs $4 and they know half the bar. “Put it on my tab,” they’ll say grandly.

A couple of Thursday nights ago, I ran into a team of bicyclers who had stopped in Sandpoint for a rest day. They were biking from the East Coast to the West Coast in support of Multiple Sclerosis. Or its demise, I suppose. The next thing I knew, it was 3 am, and I’d moved on to Jameson and listening to them describe how the trip had restored their faith in humanity.

I kept in touch, tracking their progress to Seattle. I never expected to see them again, but lo and behold, after one day in the city, some of them returned to Sandpoint, driving through the night. This may have had something to do with the fact that they knew a guy who owned a brewing company in Sandpoint, but I like to think that it was because they were telling the truth when they said Sandpoint was the best town they had discovered in their two months of touring, and they wanted another adventure before they had to return to their real lives in Philadelphia.

“It’s amazing,” they said as we ate Mexican food from Joel’s, a delicious and inexpensive lunch stand a block from my house. “Everyone is smiling here.”