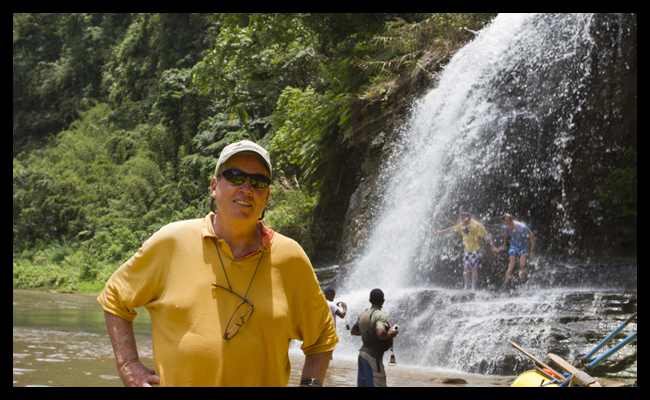 That's me in front of Free Massage. Behind the waterfall is the groom holding hands with his new BFF. Photos by David Lansing.

We paddled for hours. Actually, that’s not true. I didn’t really paddle at all. David put Christopher and Marguarite in the back and Cindy and Katie in the front which left me in the middle. For balance. So I just sat there and took photos. While everyone else did all the work.

After awhile, Cindy said her shoulder was hurting. And her knee (from where she’d jammed it when David had thrown us when we went down the first rapid). She kept rubbing it and asking Katie if she thought it looked swollen. By now I’d already taken ten thousand photos so I didn’t really need to be in the middle anymore. I told Cindy I’d switch with her.

All the boats pulled up along the bank next to the waterfall. People started creeping their way along the slippery wet rocks behind the fall. “Oh my gawd,” said Cindy. “This is just an accident waiting to happen.”

It did seem crazy. The guides stood on the wet rocks helping people inch their way along but once you got under the water, which hit your head and shoulders like wet bags of cement, you were kind of helpless. You couldn’t really see where you were going and one misstep would drop you onto the rocks below.

Our rafting guides take a shower beneath the Free Massage waterfall.

Cindy and Marguarite said they were going to sunbathe. Christopher and I got out of the boat and stood in the shallow water but neither one of us had any intention of dying on a river in Fiji. Katie, the renegade from Idaho, said she’d go. With the guides helping her, she climbed the wet rocks and cautiously moved along the slippery ledge until she was behind the waterfall. It looked like she was getting hit by a constant barrage of water balloons. It was crazy but I admired her for doing it.

The craziest thing though was this young couple from Australia who were here on their honeymoon. They decided to climb up and have their picture taken. Which isn’t the weird part. The weird part is that they did it with another guy from their boat and when they got close to the waterfall, the bride, who was kind of heavyset, slowed down while her husband and the other guy from the boat went forward. They kind of left her standing there, not quite in the waterfall but not at a safe distance either. And then the two boys stood under the cascade of water, holding hands, while the bride stood nervously to the side looking like she was absolutely terrified.

Marguarite was watching all this. “If that was my husband, I’d push him off that damn waterfall,” she said. I’m sure she meant it.

After that, all the guides climbed up the rocks and made funny faces and flashed signs and then we all got back in the boats and proceeded back down the river. We passed the boat with the newlyweds. “The bride doesn’t look too happy,” murmured Marguarite. “No free massage for him tonight.”