The last dance on Halcon

We’ve made this journey to the Jardines de la Reina three years in a row but it seems to be the general consensus that we won’t be back again next year. Which adds a little poignancy to our last evening in this pristine paradise. I think one of the things I’m going to miss most is the time spent with our guides, particularly Keko and Jimmi. 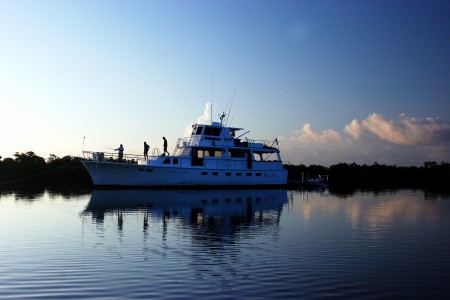 The Halcon at sunset in the Jardines de la Reina. Photos by David Lansing.

At the end of the trip the first year we handed out the tips for the guides and each of us gave a little speech, thanking them for being so patient with us and for teaching us so much about not only fishing but about life in this little Garden of Eden. When we were finished, it was Jimmi, I think, who stood up and told the story of how, after the first morning of fishing, the guides had gotten together and tried to figure out what they were going to do with us.

“You were the worst fishermen we’d ever had on the boat,” Jimmi said, laughing. “But you have learned quickly. And now you are not so bad.”

That year we spent most of our time spin-casting and also did a fair amount of trolling—activities the guides hate. They only take you trolling if they know there’s no other way you’re going to catch a fish.

This year there was no trolling and maybe a half-day, at most, of spin-casting. The rest of the time we were fly-fishing. And not doing too bad of a job. The total count included 65 bonefish, 12 tarpon, and 28 assorted fish included barracuda, red snapper, jacks, and a few other species (although I’m not sure we should really have included Pedro’s accidental parrot fish or the itty-bitty jack Fletcher caught since the lure was almost bigger than the fish). 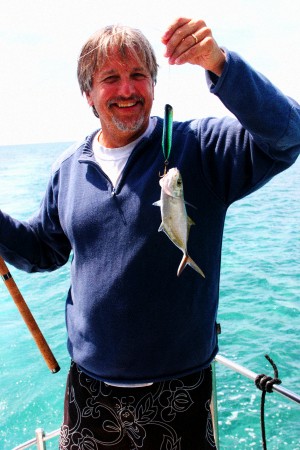 Fletcher showing off his itty-bitty jack.

At dinner Pedro gave me a bleached conch shell as an award for being “El Rey de los Pescados.” He was being generous. You’d have to say the real king of the fish was Pedro himself who, although he only caught a single red snapper in the first two days of fishing, made an incredible comeback and actually ended up having caught the most fish. Or you could make a case for Geiser who, having never saltwater fly-fished before, still managed to catch a tarpon every day for the first four days of the trip.

Nonetheless, I’m going to treasure my conch shell. As well as my time spent on the Halcón with the boys.

And now it’s time to head back to Havana. The girls arrive late tonight. After a weekend showing them around, we’ll hop aboard Unplugged for another week cruising along Cuba’s northwest coast.

But before that adventure begins, here’s a video of some of our time spent fishing in the Jardines de la Reina.

Fishing in the Jardines de la Reina, Cuba from David Lansing on Vimeo.