The odd birds at Heron’s Flight 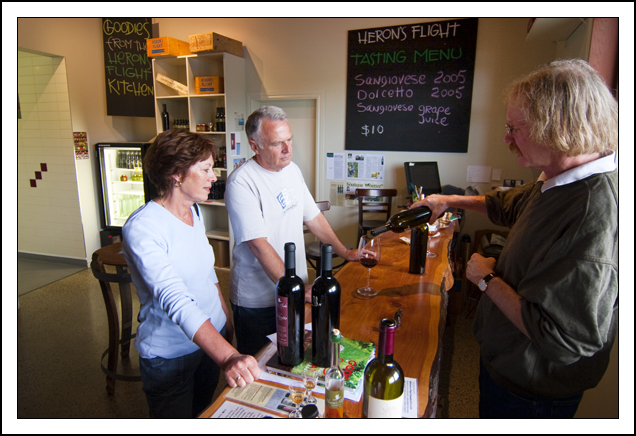 “Should have been here Sunday,” said David Hoskins as he poured me a touch of Sangiovese, an unusual varietal to find in the middle of New Zealand’s North Island.

“Why, what was Sunday?” I said, swirling the jammy wine in my glass. Back in the States, Sunday was Father’s Day but here in New Zealand that’s celebrated on the first Sunday of September, so I knew it wasn’t that.

“Sunday was Fill Your Own Bottle Day,” said David who is the proprietor of Heron’s Flight, the only vineyard in New Zealand specializing solely in Italian grapes. David explained to me that just for fun he’d started this event three years ago where you can bring your own bottle and he’ll fill it with a blend of his Dolcetto and Sangiovese wines for $9.99 (plus an extra buck if you want a cork), which is quite a bargain when you realize that his 2005 Sangiovese, which is what he was pouring me, goes for $50 a bottle and the Dolcetto is $39. 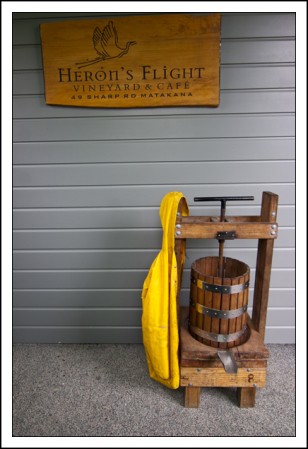 David and his wife, Mary Evans, planted the first vines at Heron’s Flight in 1987 (David says that before he started the winery he was “a chemist philosopher, which is perfect training for being a winemaker since you need to know a little chemistry to make wine and then you have to be philosophical about how it’s all going to turn out”).

Like a lot of the winemakers and entrepreneurs I’ve met in New Zealand, David and Mary are, I think they’d agree, eccentrics. David was actually raised in Pennsylvania and went to school in Virginia (where he did, indeed, major in Philosophy and Chemistry). After graduating, he decided to go see a bit of the world, as young people often do, but only made it as far as New Zealand where he met Mary, an English teacher, who was from London.

So the philosopher/chemist from Pennsylvania travels to New Zealand to meet an English teacher from London and together the two of them decide to start a winery in Matakana where they will make nothing but Italian wines. But there’s one other interesting thing about David Hoskins and Mary Evans and that is this: A few months ago they entered into a partnership with Clyde and Farida Cooper. The Coopers are from India where they ran and owned a courier business before deciding to settle in Matakana. Now the Coopers own a small vineyard in Matakana that is planted in nothing but French varietals—cabernet franc, petit verdot, merlot. So now Heron’s Flight is not only going to be sampling and selling their Italian wines but the Cooper’s French wines as well.

Just to make it more interesting: There is also a lovely restaurant at Heron’s Flight and, not too surprisingly, the menu was based on what you’d find at an Italian trattoria—good breads with marinated olives and a tapenade; homemade gnocchi; antipasto platters and various pasta dishes. But last year about this time, they brought on a new chef, a young woman of Korean decent who brought some Asian influences to the kitchen. And now that the Coopers are business partners, the restaurant has also started to introduce Indian and Persian dishes to the menu. So you’ve got your Italian/French wines to go with your pasta/curry/pulgogi.

Like I said, winemakers can be an eccentric bunch.