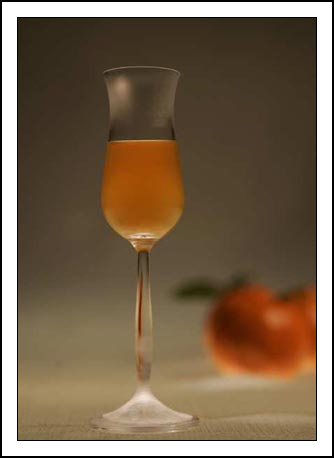 So yesterday I was talking about David Hoskins of Heron’s Flight Winery and his Italian wines as well as their restaurant with its Italian-Korean-Indian influences. I also suggested—not at all in a derogative way—that Mr. Hoskins, whose original background was as a chemist philosopher (or, perhaps, philosopher chemist) was a bit eccentric. But I forgot to mention one other Heron’s Flight oddity and that is Mr. Hoskins ratafia, which he both serves in the restaurant and sells at the winery.

The first time I sampled ratafia, which is a homemade infused liqueur, usually made with brandy but also vodka and wine, was five or six years ago on the island of Ile de Re off the west coast of France. It was made by a very charming man named Eric Nicolai who owned a hotel and bar called Le Vieux Gréement. As I recall, Eric made his ratafia with an island cognac, oranges, cloves, cardamon, and sugar. It tasted vaguely of Grand Marnier—but fresher and livelier.

I have also had Spanish versions of ratafia, made with a combination of red wine and vodka as well as citrus, cinnamon, and other spices that, to me, seemed more like fortified sangria.

Anyway, David Hoskins makes a house ratafia at Heron’s Flight using what he says is “a traditional 18th century recipe” with quinces. Supposedly ratafia got started around the 18th century in France when this homemade elixir was imbibed when ratifying treaties and the like and, indeed, the most common was a quince ratafia. My guess is that David borrowed his recipe from Jane Grigson’s Good Things, a fascinating cookbook that explains what to do with kippers or pigeons and how to bake meat pies or salt venison. Towards the back of the book, she explains how to make fruit liqueurs and ratafias, including an old-fashioned recipe for quince ratafia in which you basically take two large quinces, grate them, stuff into a quart jar, add some sugar, cinnamon, ginger, and mace, and then fill the bottle with brandy or vodka. Leave in a cool, dark place for about a month and you’ve got quince ratafia, just like what David Hoskins sells for $39 for about 8 ounces.

But I have to say I’m not all that keen on quince ratafia. I much prefer some sort of orange-based ratafia made with brandy or, if you want to be more French about it, armagnac. In winter, I grow blood oranges, kumquats, and tangerines, and any of these will do (my favorite is made with kumquats but tangerines are nice as well). Here’s my recipe:

1.   Rinse the fruit and separate the peels from the fruit, reserving the peels. Squeeze the juice.

2.   Remove the white pith from the zest of about 12 tangerines. Cut the zest into strips until you have about 2 cups.

3.   Combine the brandy, juice, zest and simple syrup in a large resealable jar. Toast the clove slightly in a pan over medium heat, just until fragrant, and add it to the brandy mixture. Crush the cardamom pod with a mortar and pestle and add it to the mixture. Seal the jar, shake it, and store in a dark place for at least 1 month, shaking every day or so.