The story of La Parroquia

In Alice Adams’ book Mexico: Some Travels and Some Travelers There, she writes: “Mexican churches so often have that slightly lopsided, mildly deranged look; they were clearly made by striving, imperfect, talented, but fallible human beings, which may account for some of their strong appeal.”

She most certainly must have been thinking of San Miguel’s most famous church, La Parroquia de San Miguel Arcángel which everyone simply refers to as La Parroquia—the parish church. It is to this part of Mexico what Notre Dame is to Paris, a beloved icon that in some ways is San Miguel. 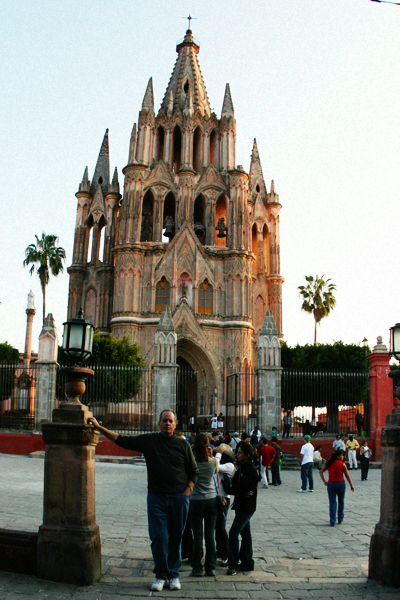 Like the buildings in Mexico City, church after church was built on this same site in San Miguel beginning in the 16th century, with each new architect taking some of what he liked and replacing that which he did not. In 1649, the church had so deteriorated that most of it was destroyed and a new one built. Thirty years later, the process was repeated and shortly after that, a new church was constructed in something of a Baroque style. For almost two hundred years, that’s the way it stayed. Then things got interesting.

Around 1880, a self-taught mestizo architect, Don Zeferino Gutiérrez, who also happened to be the city’s quarry master, was hired to build a new church façade. His inspiration came from the great Gothic European cathedrals—like Notre Dame. Had he ever been to Europe and seen these great churches? Of course not. But he had seen postcards of them. And evidently that was enough.

Now, because Zeferino was self-taught and because he was working with mestizo craftsmen who could neither read nor write, the architect used a stick to draw his designs for the workmen in the red clay soil. This is how I want the tower clock to look, he told them, drawing it in the soil. And this is how the choral windows should be. And so on. 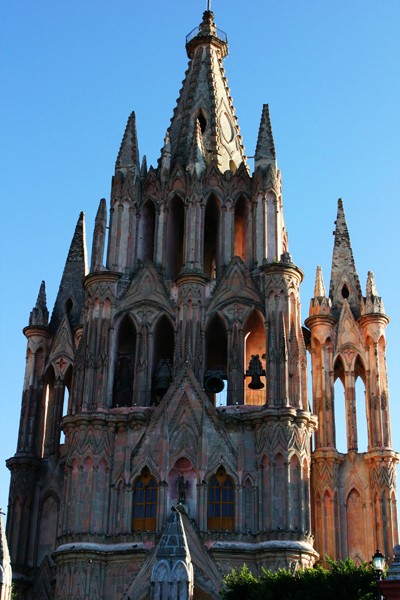 The bell tower of La Parroquia. Photos by David Lansing.

The result is a mass of pink pilasters, balustrades, windows, spires, and steeples—all with a slight lean to them, like a drooping sand castle—that soar over the grand houses that rim the Jardín.

There are eight bells in the tower and all of them have names. The largest, called La Luz, was cast in 1732. It rings out every evening.

Some critics call La Parroquia an abomination. Others have called it “grotesque gothesque” and “Disneyesque.”

I think it is simply the most beautiful church I have ever seen.