The other day I was walking around downtown Santiago and got really, really hungry so I stopped in at Fuente Alemana, the funky German-inspired sandwich shop Liz Caskey wrote about earlier (see the Friday blog), to get a lomito completo, which is a big ol’ honkin’ pork sandwich topped with what looks like about a quart of mayo and a half-dozen mashed avocados. I’m kidding—kind of—it probably has only a cup or two of mayo on it and no more than four avocados.

As I’ve said, in Chile, mayo is one of the major food groups (and sugar is another). Anyway, one of the Nurse Jackie-looking waitresses served me my sandwich with a tall schop, which is a Chilean draft beer, and asked me if I wanted any aji oro with it.

She put her hands on her hips and raised a singleeyebrow at me. Was I sure?

She fanned her mouth as if it were on fire. They’re very hot, she said.

This is funny. Chileans have no idea what hot food tastes like. And these pickled yellow peppers—the aji oro—are nothing. Still, when I piled them on top of my lomito, the waitresses in their Bavarian Hausfrau outfits gathered around to stare at me like they were expecting the top of my head to explode at any minute. 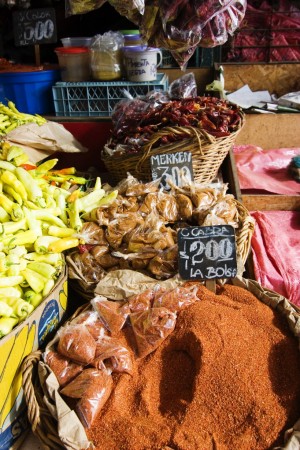 Bags of merken next to aji oro at the Vega Mercado in Santiago. Photo by David Lansing.

Here’s the thing: Chileans don’t do spices. There are two reasons for this: One, they have an incredible abundance of wonderful fruit and produce and their philosophy is to serve it as simply as possible (the two exceptions being, of course, that everything tastes better with mayo and avocado on it). Secondly, Chileans have always equated spicy food with the underclass. In their minds, the only people who put garlic or chilies in their food are peasants. Because, you know, it’s kind of stinky and everything.

The best example of this may be the Chilean spice called merken. Merken has been around forever. It’s something that comes from Chile’s indigenous people, the Mapuche. The Mapuche dry 6-inch long smoked red chili peppersand then grind them up with coriander seeds in a stone mortar until everything has the look and consistency of paprika and then add salt, cilantro seeds, and oregano to it. This is like the key spice for Mapuche and they use it to season meats, potatoes—whatever.

It’s fabulous. But until a few years ago, you’d never go into a nice Santiago restaurant and find a dish with merken in it. Because, you see, it was a spice of the peasants. And who wanted that?

But that’s changed. I’ve had merken in a couple of very nice dishes here—in soups, on chicken—but my favorite was a lovely dish of pureed potatoes seasoned with merken. Perfection.

Now if they’d just start using a little more garlic with the chicken….