Only Luscious and I are left. The others all left early this morning. I didn’t even wakeup in time to say good-bye. Maybe it’s for the best.

This afternoon Luscious and I will take a taxi to Blowing Point, catch the ferry back to St. Maarten, then on to Miami. It’s going to be tough leaving here. You get in to the groove of island life and appreciate the slower pace. I’ll miss flirting with Vera, my waitress, at Blue. I’ll miss the late afternoon thunder storms and the sound of the waves breaking outside my villa at night. I’ll miss the Anguilla crayfish at Pimms and the cold Carib beers at Elvis’. But most of all I think I’ll miss my bandmates. Even though we never played a single tune together they all put a song in my heart. 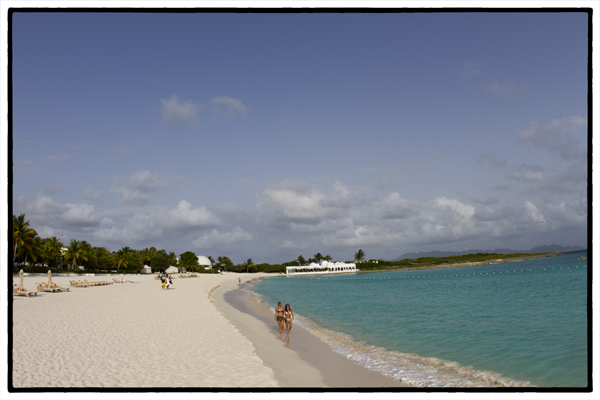 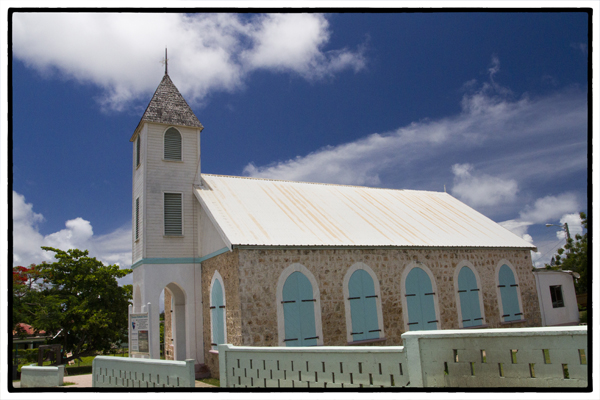 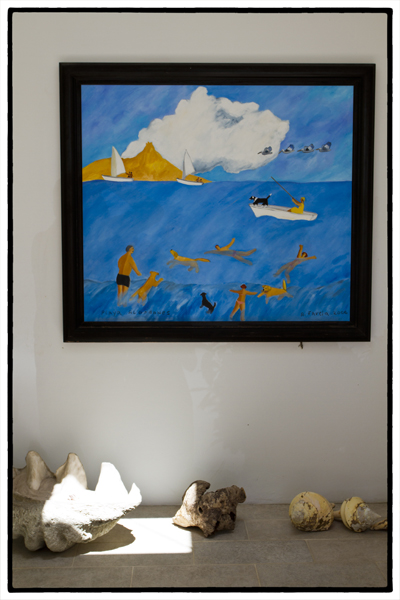 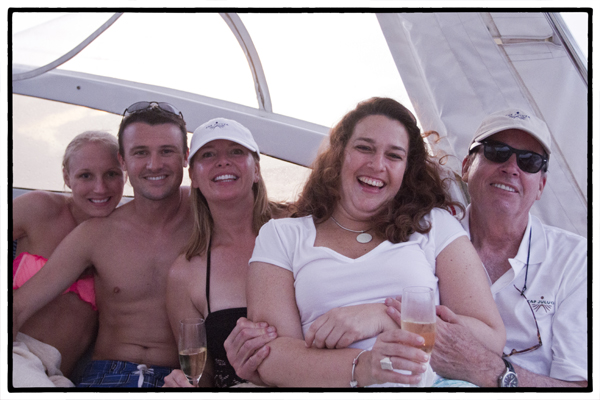 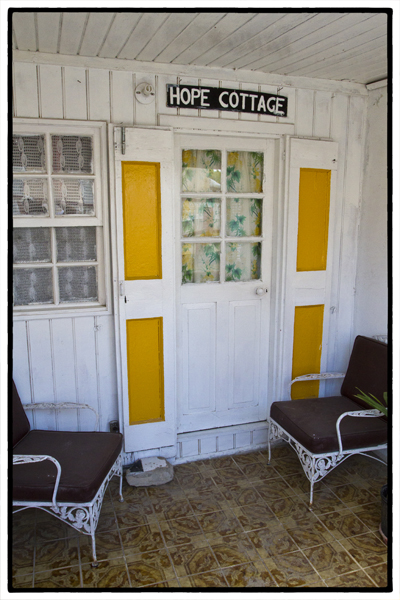 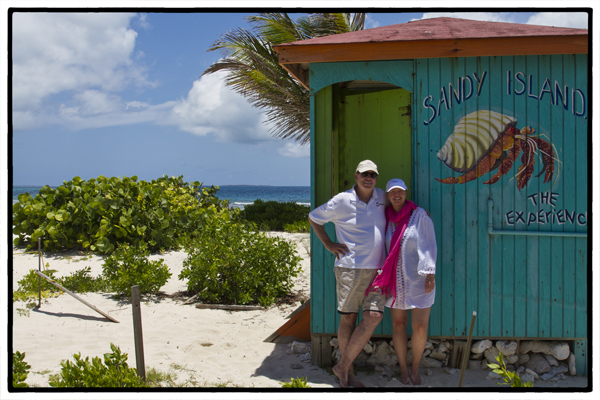 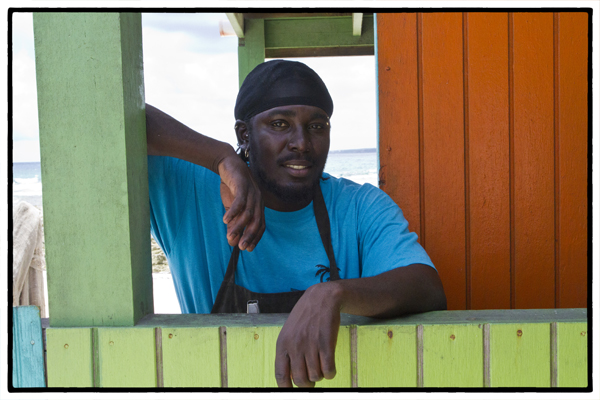 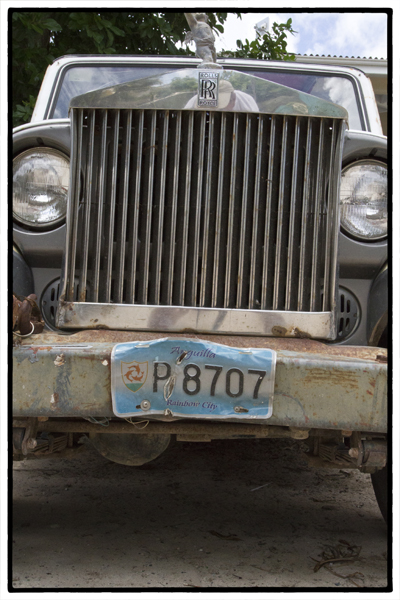 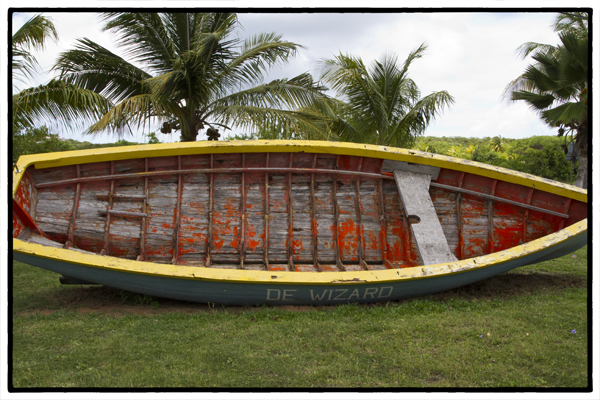 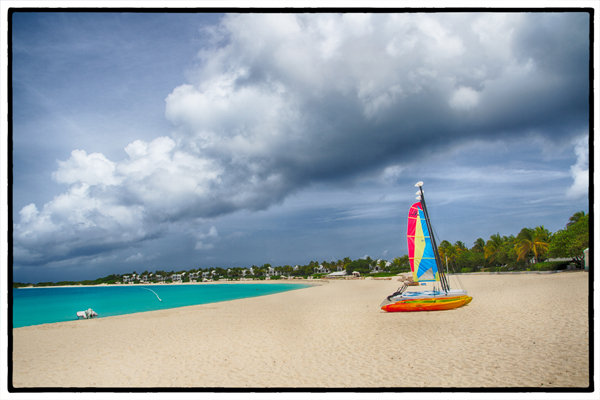 The band and Omari Banks 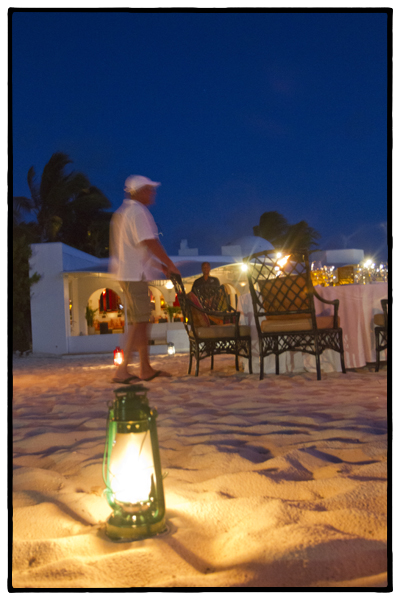 Dinner on the beach at Cap Juluca. Photo by David Lansing.

Sad news: We’re breaking up the band. The decision came last night during our Survivor-like dinner on the beach. We placed a kerosene lantern on the sand and then I passed around some strips of paper and everyone was supposed to write down who they thought should be voted out of the band. There was one vote each for Luscious, Bail-Out, T-Bone, Mrs. Pookie, The Man, and me.

The thing is, I think we all voted for ourselves.

After it was decided that we were disbanding, the evening became a lot more pleasant. We ate, we drank, and then we decided to go listen to Omari Banks who was playing at his father’s place, the Dune Preserve Beach Bar.

Everyone went back to their rooms to freshen up and the plan was to meet in front of the resort in 20 minutes. When I got there, Bail-Out was the only one there. I shook his hand.

Bail-Out nodded. “You know,” he said, “we were never going to make it as a band.”

“Well, for one thing, none of us could play an instrument.”

“That never stopped the Sex Pistols.”

I heard, later, that everyone had a good time. Mrs. Pookie even hooked up with the golf pro she’d met on the way to Anguilla. As for me, I just went back to my room and watched an old movie. I think it was the right thing to do. You know I don’t like reggae.

Quiet after the storm 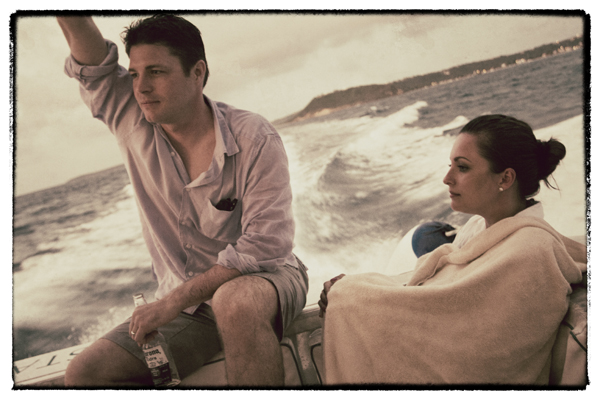 Tiffany and Graham on the way back to Cap Juluca. Photo by David Lansing.

There were two newlywed couples on our sunset cruise. The crazy drunk couple who almost killed themselves leaping off the cliff and a very sweet couple, Tiffany and Graham, who watched all the crazy shenanigans on the boat and only smiled.

The bride, Tiffany, saw how many pictures I was taking on the cruise and shyly asked if I might e-mail her any “good ones.” I told her I would and gave her my email address.

As we headed back to Cap Juluca, Tif and Graham staked out a spot on the back of the boat, away from everyone else. They sat pensively looking out over the ocean, lost in their own thoughts. I wondered what must be going through their heads.

The next day I saw them at lunch and asked them if they had done anything exciting that evening when we got back to the resort. They said they had been so worn out that night that they’d ordered a pizza from room service and watched a movie in their room. “I guess we just wanted a little quiet time,” said Tiffany. I didn’t blame them. I felt like I needed a little quiet time myself. 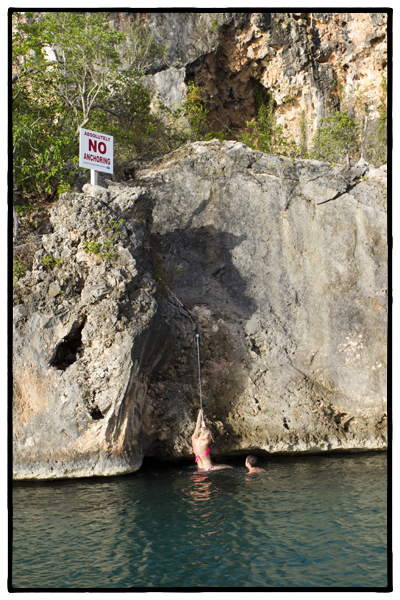 W grabs for the rope to scramble up the side of the cliff. Photo by David Lansing.

W, the newlywed on our sunset cruise, wanted to jump off the cliff. Which was crazy because W wasn’t capable, at this point, of walking from one side of the boat to the other without falling into someone’s lap. And, hell, we were anchored.

W was asking everyone on the boat to go with her to jump. “I know I can jump,” she said, “I just don’t know if I can make it back to the boat. I’m not the best swimmer.”

I asked W why her hubby didn’t jump with her.

“Because he’s a pussy!” she shouted. Her husband rolled his eyes and took a swig of his beer.

“Because I want to JUMP OFF THE CLIFF!”

But her hubby wouldn’t go with her. Neither would either of the other two newlyweds. And I certainly wasn’t going to get in the water with a drunk woman, scale a ragged limestone cliff (with a prominent sign at the top that said in big bold red letters ABSOLUTELY NO JUMPING!).

At that point her hubby had a change of heart and said he’d jump off the cliff with his wife. “Come on, let’s go,” he said, diving into the water.

If this was a movie we’d all be sitting there thinking the same thing: Someone is going to die. That’s exactly how I felt: Someone was going to die. So, of course, I got my camera ready.

So W got in the water and Luscious got in the water and Luscious tried to keep W afloat long enough to swim over to the cliff. There was a rope hanging down the side and W grabbed that and tried to pull herself up out of the water but was so drunk that she kept bouncing against the rocks. It was an ugly thing to see. But she didn’t give up. She struggled and struggled until she found a toehold and pulled herself up and out of the water and then bounced against the cliff some more while she used the rope to climb to the top.

I could hardly watch at this point. What I was most afraid of was that W would slip while running to the end of the cliff and she’d just tumble over the side and crash on the rocks below. You’ve got to remember that this is a girl who was so drunk she couldn’t hold half a glass of champagne in her hand without spilling it.

And then just like that, she shrieked and ran towards the cliff like a foal on wobbly legs, threw her arms up in the air, and screamed as she went over the edge.

How long was it before she surfaced? Not very long. But it seemed like forever. She screamed again when she finally came up for air. Luscious was right there to steady her and help her swim back. It wasn’t easy because W was laughing in that nervous way people have after just avoiding death and she was swallowing a lot of water and shivering though it wasn’t the least bit cold out.  Together, with the help of Elvis, they got her back in to the boat and wrapped a towel around her. I’d never seen a girl shake so much. It was like she was in shock. She had some nasty looking scrapes and bruises on her back and thighs but bygod, she made it. Just like she said she would. 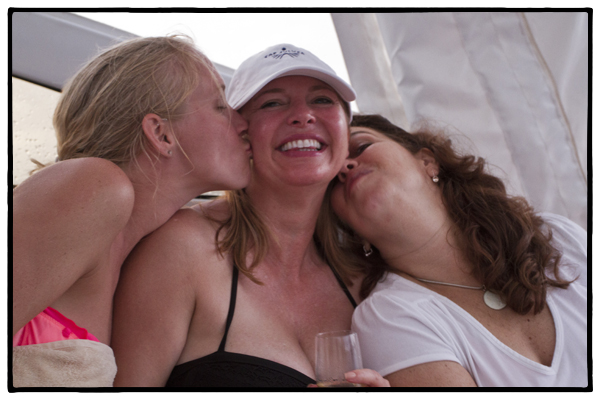 W, left, and Mrs. Pookie, far right, thank Luscious for getting W back to the boat. Photo by David Lansing.

A bride on the sunset cruise 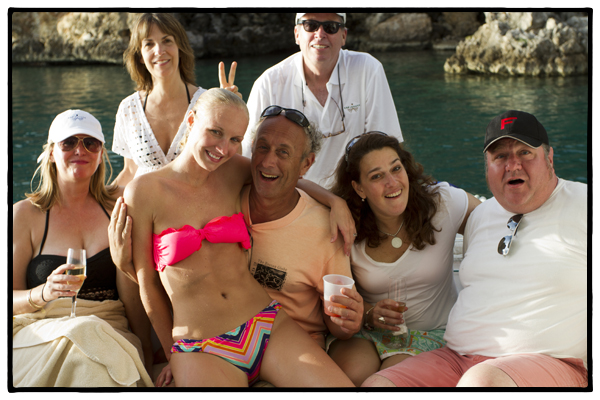 The bride, in the pink bikini, posing with the band on a sunset cruise from Cap Juluca. Photo by Elvis.

Besides the band, there were two honeymooning couples on the cruise. They were pretty darn cute—and a bit drunk. One of the new brides, who I will just call W, was more than a little drunk. She was completely hammered. And that was before the cruise started.

But she was a cheerful drunk. When we told her we were a band and were on the island for rehearsals, she insisted on having her picture taken with us. “Who knows?” she said. “Some day ya’ all could be famous.”

So she plopped herself down on Bail-Outs lap and Elvis took her picture. Then she got herself another glass of champagne (though Elvis was giving her the smallest pours he could get away with without her really noticing).

I asked Elvis if this was typical for a sunset cruise. This is nothing, he said. “Let me tell you about the Russians.” And he did. It seems these Russians had heard stories about men like Elvis and wanted to see for themselves if it was true or not. “They offered me several thousand dollars just to, you know, lower my shorts.”

Of course not, said Elvis.

“Oh darn,” she said. I think she was wondering herself. And I was wondering how Elvis was going to handle her. So was everyone on the boat. Including her husband.