An evening at the Whale’s Tale 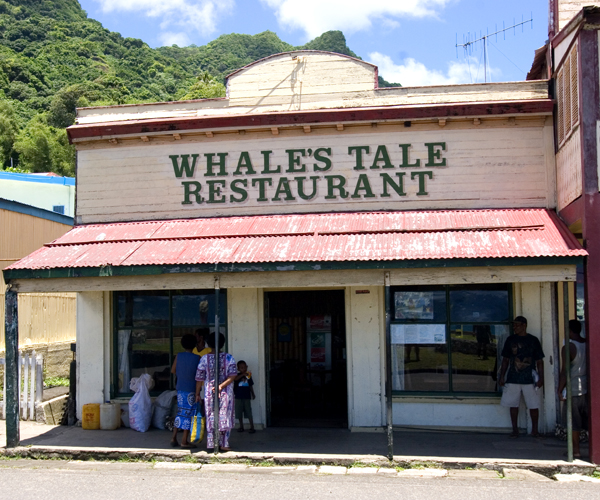 Everything about Levuka makes you feel as if you are on a Hollywood set for a movie about life in the South Seas during Britain’s colonial heyday. Walking around my hotel, the Royal, with its century-old billard table in the bar, you half-expect to find Somerset Maugham wearing a tropical suit and lounging on the wicker furniture drinking a tumbler of Holland gin, neat.

There’s only a few other people staying at the hotel at the moment. One of them is a young chap who I’ve noticed at breakfast every morning. We nod to each other when passing in the dining room, exchanging tight, constrained British smiles but never saying a word to each other. It’s very odd.

For some reason or another we’ve also ended up dining at the Whale’s Tale about the same time every night, sitting at separate tables in a room where there are only four or five tables to begin with. Again, we never speak to each other. Until last night, that is, when we happened to catch each other’s eye as we were digging into our walu and chips and he says, in a stiff-upper lip accent, “So…how long do you expect to take in the local cuisine?”

Anywhere else in the world the person dining next to you would say, “How long are you on vacation?” but not on Ovalau. Here it’s “How long do you expect to take in the local cuisine?” Which sounds like an old movie line, doesn’t it?

So I gave him an old movie line in return: “Haven’t the foggiest.”

Most nights at the Whale’s Tale there are only three, maybe four diners. All evening. Yet every few minutes, the front door opens, the old dog, lying on his side, tips his head up to have a silent look, and whoever has come in goes to the front counter holding a few bills in their hands. Without a word, the old Fijian momma who works the front takes the money and comes back with a little bag of something. I’m guessing it’s kava, that nasty tranquilizing stuff made from the dried root of a certain pepper plant. Obviously the old woman and her daughter, who cooks up the frozen fish and chips, don’t make any real money on the food side of the Whale’s Tale. Most of their income, I suppose, comes from the steady parade of kava buyers. Well, one has to do what one has to do on a tiny island like this, don’t you think?