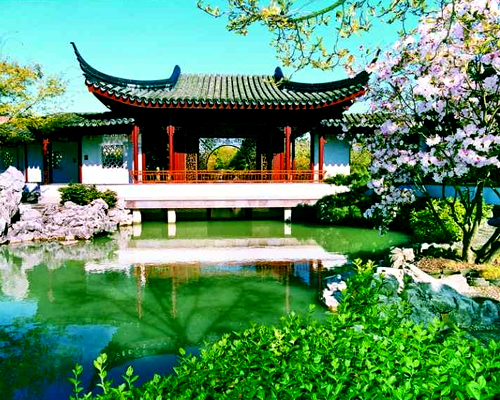 I decided to spend my last day in Vancouver wandering aimlessly around Chinatown, beginning at the Dr. Sun Yat-Sen garden were I sat on a damp bench beside a milky jade-colored pond where languid turtles—a Chinese symbol of long life—caught a bit of sun on pitted soapstone rocks. There’s something truly wonderful about the serenity of this garden and its metaphorical nature: the purity of the water lily, courage of the chrysanthemum, gracefulness of the weeping willows drooping over the water. And the many, many blue iris, symbols of fertility, lining the banks of the pond.

From here I just wandered down the street, dropping in at a tea shop where I bought a box of jasmine tea before ending up in a general goods shop where I picked up several bars of fragrant soap, made in China. I bought them as much—or perhaps more—for their beautiful Chinese wrapping paper as anything else.

Rambutan hanging in a Chinatown market.

The fun of Chinatown—any Chinatown—is just being overwhelmed by the exotic smells, the peculiar sounds. Like the old women bickering with the produce man over the freshness of the hairy crimson rambutans hanging from the roof of his stall, or the surprising taste of the sweet and crunchy raw sea asparagus offered to me by a tiny little old lady whose smile lit up the store.

At a fish monger’s on Keefer I watched with fascination as a young boy in a bloody apron lined a row of ling cod, propped up on a bed of ice, that still reflexively flapped their gills as if they were prize fighters just trying to catch their breath. And at the N&S Trading Co., a wonderfully tacky tourist shop with an impressive collection of cheap tin wind-up toys from China, I bought a blue cardboard box that, when you took off the lid, revealed a solar-powered chirping cricket.

Back on the street, the cricket refused to quiet down—even with the lid on. I tucked the box into the pocket of my leather jacket and hailed a cab. The cricket chirped happily all the way back to the hotel as my Asian driver repeatedly glanced at me in his rear view mirror. Can you imagine what people are going to think about my little cricket when I get on the plane tomorrow?