Curry chips and a bottle of ale

It’s a two-part process getting from Jura to our inn, the West Loch Hotel near Kennacraig. First, we must take the short ferry ride back to Port Ellen on Islay. I notice that as Charles drives off the boat, there is a single sign post with two words on it: ARDBEG, with an arrow pointing right, and BOWMORE, with an arrow pointing left. Islay, then, is a place where directions are defined by which whisky distillery you’re headed towards. 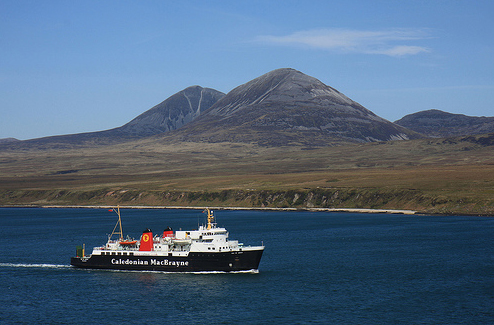 CalMac ferry to Islay with Paps of Jura in the background. Photo by David May.

We then have to wait 30 or 40 minutes in Port Ellen for the Isle of Arran to take us to Kennacraig. I’m feeling a bit washed out for some reason when we arrive back in Port Ellen. Something about the solitude on Jura and my time sitting in a dark, dank farm house drinking tea and listening to the stories of Mike Richardson—thinking of Orwell and the Future Stone and the island faeries has left me feeling reflective.

I’m thinking it might be nice to find a pub near the harbor and Charles tells me there’s one nearby that has several walls covered with excellent murals of island scenes depicting the local people. He says it was painted by an Irish artist, each character being placed in the composition in return for a dram—or two—of whisky.

“They say the chap died of drink shortly after finishing the mural,” Charles says.

Great. If that’s Charles way of suggesting we just sit in the car waiting for the ferry, he’s successful.

The wind has come up and there’s an icy chill in the air as we lumber on to the Isle of Arran, part of the famed Caledonian MacBrayne ferry line—what everyone around here just calls “CalMac.” Without CalMac, it would be almost impossible to get around the west coast of Scotland.

At first I’m thinking maybe I’ll just grab a pint and find a snug corner to read my book, but Charles talks me into getting a bite to eat with him. We both order the curry and chips with tomato sauce. As Charles says, “It the awful sort of curry we used to get in school, with a most unnatural yellow color.”

Just perfect with soggy chips and a bottle of Islay Ale. Afterwards, I do find a quiet corner on the boat where I quickly fall asleep. When I awake, an hour or so later, we are in Kennacraig. It’s a short drive to the West Loch Hotel, a sort of cozy farmhouse, where I find a most inviting fire crackling in the bar and men wearing fishing clothes sitting around quietly enjoying a whisky. I order a drink and stare at the fire. After awhile Charles comes downstairs and suggests we have dinner in the restaurant. I tell him I think I’ll pass. 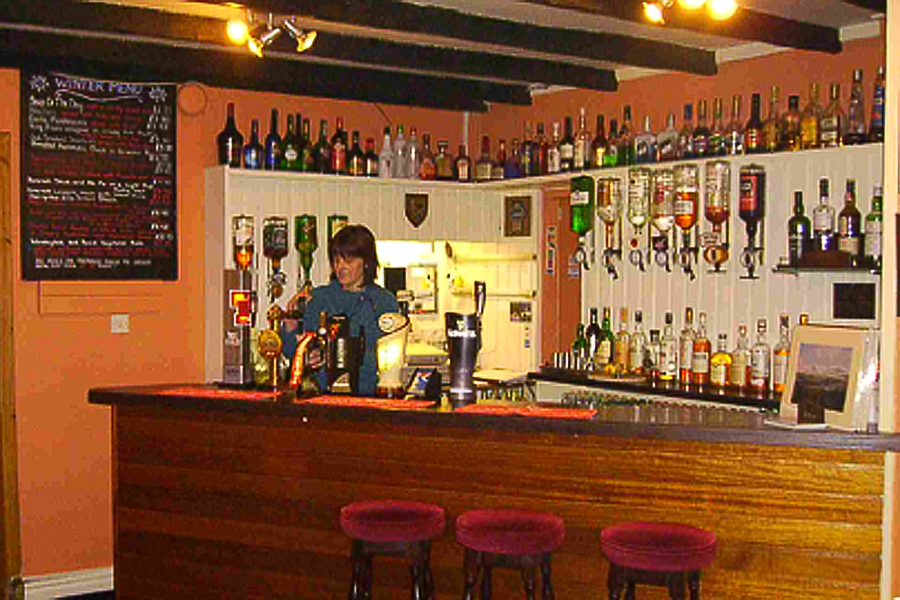 The bar at the West Loch Hotel near Kennacraig.

“Are you feeling alright?” he asks.

He heads off for the little restaurant overlooking the loch. I finish my whisky, order another one, and think about the Irish artist and his wall mural. I’m wishing now, for some reason, that we’d gone to see it.