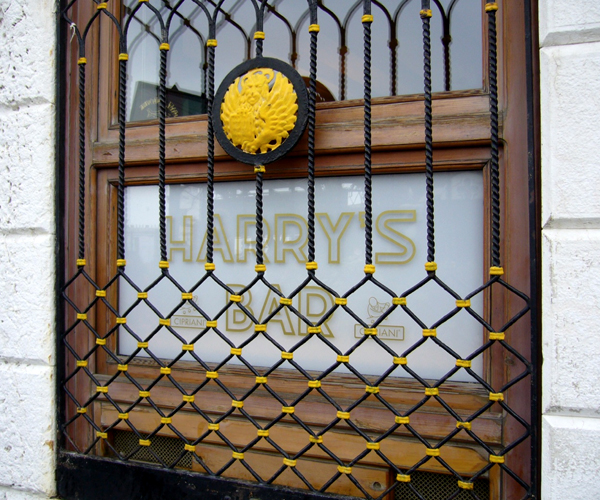 The only reason I even stopped in Venice was because there’d been a change in my flight plans and I suddenly had a couple of weeks to fill before flying home. It was the end of a very long trip, a personal sabbatical of sorts, and I’d spent late summer and fall living in an atelier in Paris before moving on to Madrid, Florence, and eventually the Cannery Islands. I wasn’t exactly jaded at that point—just tired. Too many smoky train cars, damp hotel rooms, plats du jour.

And since my return flight was out of Rome, which I’d already visited, why not go to Venice? The fact that it was off-season, just after Carnival, made it even better. The weather would be dreary, Piazza San Marco no doubt covered in sloshy duckboards, and the cafes empty. Which perfectly suited my subdued mood.

I intentionally decided to stay away from touristy San Marco and reserved a room in the Dorsoduro sestiere, near the Accademia, a pretty-enough neighborhood not far from the Guggenheim Museum. The late afternoon was cold and damp when I decided to take a stroll along the Zattere, the waterfront path that stretches along Dorsoduro’s southern shore past stylish cafes (mostly closed) and the rustic bars known as bacari, to Punta della Dogana—the site of the old customs house which is one of the best places in Venice to view, from a distance, the Doge’s Palace and the Campanile of San Marco.

Wait. I am being disingenuous here. I am giving you a rather Baedecker-like tour of my first trip to Venice (“Be sure not to miss the church of Santa Maria della Salute, an outstanding example of Baroque architecture!”), when in fact, at the time, my heart was beating like that of a young school boy who has suddenly spied his heart’s most ardent desire standing alone at the end of the school hallway. I wasn’t out for a casual wander in Venice. There was purpose in my step. My mind knew where my heart was leading me—to a crossing of the Grand Canal. The only question yet to be resolved–and the reason my heart was racing so—was whether I’d have the courage to take it.

The church at Salute is, indeed, a fine structure, but I don’t care about that. I only mention it because it was from here that I caught the traghetto that changed my life. A traghetto, if you don’t know, is an inexpensive gondola that ferries mostly Venetians across the Grand Canal. There are seven different traghetti crossing points in Venice, but the one I stepped aboard that day crossed from the point near the church of La Salute to a gondola mooring at San Marco.

Now, it is a Venetian tradition that when you cross the Grand Canal in a traghetto, you stand. Which can be a bit tricky if it is late in the day, as it was now, when clouds of winter fog, called nebbia, come rolling in across the lagoon. So there I was, standing nervously in a traghetto, my vision blurred by a soupy fog, worried that I might be pitched over the side or, worse yet, that we might be struck by a vaporetti also plying these waters.

So that is one thing to consider but there is something else I haven’t told you yet. The reason I was heading home in a couple of weeks after this rather extended European tour was because I was going to law school. The European sabbatical, you see, was my way of postponing the inevitable—becoming an adult.

But here’s the thing: While in Europe, I’d penned a few inept short stories in a blue notebook I carried around, and every so often I’d have this heretical notion that perhaps I should be a writer instead of a lawyer. Though I knew that was just crazy and a sure recipe for disaster. I mean, lawyers make money and writers don’t, right? Still, I couldn’t quite get the idea out of my head. It was as if I was engaged to a very nice, very proper young woman from a wealthy family yet couldn’t stop thinking about some saucy street busker I’d come across who played her violin for coins on the Piazza San Marco. You see the problem.

Which brings us back to the fog and the traghetto and Venice. Because even though I couldn’t see it, I knew that on the other side of the canal was a slightly louche grand dame called the Gritti Palace. A sumptuous hotel known for its Murano chandeliers, 16th-century damask furnishings, and the place where, in the winter of 1949, Ernest Hemingway took a suite to work on a short story, set in Venice, “about shooting ducks before dawn in the chilly, foggy waters of the Lagoon.” But at the Gritti something else happened: the head waiter introduced Papa to a nearby bacaro, called Harry’s Bar, where he spent many a late afternoon entertaining a nineteen-year-old Venetian named Adriana who was fictionally transformed into the beautiful countess Renata in the short story that expanded to become the novel “Across the River and Into the Trees.”

“The book came to me in a sort of vision in Harry’s Bar in Venice,” said Papa about the novel.

And that vision, I think, was a young Venetian girl.

I thought of that line as the bank of San Marco slowly appeared out of the fog, for there, directly ahead of us, was Hemingway’s old haunt, Harry’s Bar.

Let me be honest with you: There is nothing memorable about Harry’s Bar. It is smaller than one would imagine, aesthetically unremarkable, and its cocktails are small and overpriced. Yet I felt that the ghost of Hemingway was palpably present, which both frightened and excited me. It is said that the bellini was created here by owner Giuseppi Cipriani and if you go to Harry’s Bar in Venice at least half the patrons will be sipping the vaguely pink drink made with pureed white peaches and Prosecco, as they were on my visit. But I couldn’t imagine Papa drinking a bellini. It just didn’t feel right. So I ordered a grappa and sipped it slowly, watching the crowd—a mixture of well-dressed Italians and weather-beaten tourists—stumble in and look around for an open table where they could shed their wet coats and scarves before ordering a drink.

As I said, there was nothing remarkable about Harry’s. Except that it was warm and cozy, the busy barmen in their white jackets quite solicitous, particularly of single patrons like myself, and everything about it made me feel as if I had been here before. I settled in.

The pale light from the frosty windows soon dimmed as evening came on. I looked over the menu while ordering un’ ombra, a small glass of white Veneto wine. A young woman came in, shook her damp hair out of a wool beret, and sat on the bar stool next to me, leaning a wet instrument case up against the bar. She ordered an espresso. I asked her if she spoke English, she nodded, and we made small talk. She played the violin in one of the groups that roamed Florian and Quadri, the old coffee houses on St. Marks Square. She lived in Mestre and came to Venice just in the evenings to make a little extra money. She said this was the first time she had come to Harry’s Bar. I asked her why she’d stopped and she just shrugged. “I don’t know why,” she said. “Fate?” And then she laughed.

She finished her espresso and said she should be going. She stood up and put on her long wool coat and scarf and, after shaking my hand, invited me to stop by Florian later in the evening to hear her play. I promised I would.

“And what do you do?” she asked as she tucked her violin case under her arm.

Without even thinking about it, I blurted, “I’m a writer.”

“Really?” she said. She looked me over as if newly appraising me. “Well, then. Tell me your name. I shall look for it.”

I told her who I was, the words sounding new to me. Still, I knew from that moment on who and what I was.