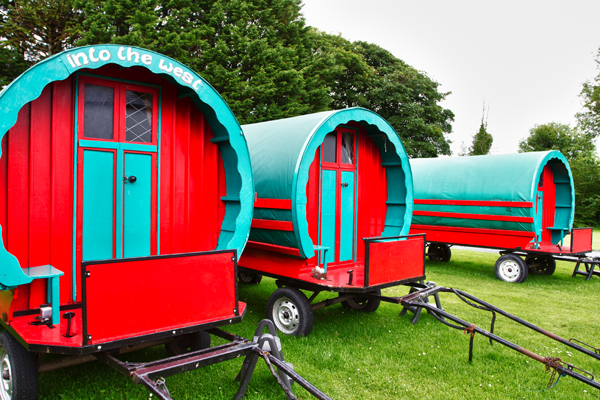 An attractive woman in her fifties opens the front door of her house the minute Mr. Lynch and I get out of the car. She’s got a crying baby draped over her shoulder. You’re late, she says with a smile on her face. We were expecting you hours ago. Yes, yes, sorry about that, says Mr. Lynch. We had god’s own time trying to find your place. The woman, who introduces herself as Ann, laughs and says, Oh, I’ve heard that story before. In fact, there’s another couple coming from Dublin that was supposed to have arrived three hours ago and we haven’t heard from them either.

Ann takes us into the modest farmhouse which is also used as a B&B and asks us if we’d like some tea. You’re probably hungry as well, she says. Can I make you something?

Ann shows us to a breakfast table at the back of the house and while she’s making us a pot of tea and some finger sandwiches, we go through an album filled with comments from others who have rented their caravans.

Like this one from Natascha and Erik-Jan Koolen from Holland: “We are here for our honeymoon. We had a caravan with the horse Molly and a riding horse named Tessie. We were here for one night and we had a great dinner and breakfast (our first Irish breakfast) and it was very good. Erik liked the Irish beer (Smithwicks). Thank you for the nice time in the pub and the hospitality of the whole family. We had a good time everywhere.”

Look here, I say to Mr. Lynch, showing him the entry. Honeymooners. Can you imagine? It’s probably very romantic, says Mr. Lynch. But not much room, say I. Well, when you’re on your honeymoon you don’t need a lot of room. That’s the whole point. To be together. I guess. But you think it’d be a little cramped in one of those caravans. Well, obviously Natascha and Erik liked it. I wonder if they’ve ever been back? I say, noting that the entry was written more than five years ago. Oh, sure, says Mr. Lynch. They probably come back every year on their anniversary. Unless they’re divorced, I say. Mr. Lynch just shakes his head. You are just Mr. Sunshine, aren’t you?

Ann brings out our tea and sandwiches and then goes back into the kitchen to take care of her grandchild. We finish our meal, bring the plates back to the kitchen, and sit back down at the table. I read some more of the entries in the guest album. We’re still sitting there half an hour later. I get up and go to the kitchen. So, I say to Ann, are we waiting on the couple from Dublin then before we start?

No, says Ann. You two can take the caravan out whenever you want. Should I give Larry a call?

Larry owns the caravans, she says. I just run the farmhouse. We don’t have anything to do with the horses or the caravans. That would be Larry.

Right then, says Ann. She calls Larry. And not five minutes later, there’s Larry: hair-disheveled, nose red, eyes bleary, looking like he’s just been dragged out of the pub. So then, he says after introducing himself, you’re going to take out one of the caravans this afternoon are you? That’s the plan, I tell him. Well then, he says, limping towards the pasture, you’d better come over here and pick yourself a horse.

And that’s what we do.