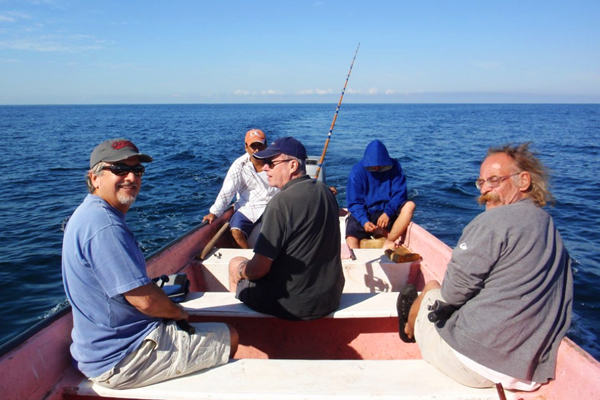 The old men in the sea preparing to fish with live dead bait. Photo by Mechas Grinnell.

Yesterday Chris and I drove down the hill to the little village of Plantinitos. It’s not fair to actually call it a village. It’s just a collection of beach restaurants, each looking like the other, a couple of little shops where you can get an inflatable plastic shark or cold Coronas, and, further back in the jungle, a few slapped together houses, made mostly of discarded or recycled construction materials, where the fishermen and their families live.

In one of these houses, with chickens and goats and dogs and cats all running in and out of the open doors, lives Diego who, if he doesn’t have anything else to do, will often times take us out fishing. When we got to Diego’s house it was 10 or 11 in the morning but he wasn’t up yet. His wife, who was sitting outside on an upstairs balcony washing clothes in a bucket, went to get him. Diego, shirtless, came out of the house a few minutes later scratching his stomach.

Would it be possible to go fishing tomorrow morning? Chris asked him.

“¿Por qué no?” answered Diego. Two of his daughters, shoeless and wearing thin faded dresses, leaned into him on either side, holding on to his thick legs as if they were tree trunks.

“Could we go further out and fish for dorado?”

Diego nodded. Chris asked him where he would get the live bait. Diego told him he already had some. Chris said, “¿Aquí?” and Diego yawned and nodded. What kind of live bait is it? Chris asked. “Sardinas congeladas,” replied Diego, growing bored with the conversation. “Frozen sardines?” Chris said, confused. “Yes,” said Diego. “El cebo vivo está muerto.” The live bait is dead.

The conversation went around in a circle like this for a few more minutes until Chris made it clear that he was hoping we could get live bait that was alive. Diego let us know this would be more of a problem. To get live bait that was alive he’d have to get up very early in the morning and take his panga around to the estuary and throw a net in the water and catch the fish. This he could do, but it seemed a waste of time. The dead live bait was just as good for catching dorado. Still, Chris said, it would be better if Diego could get the live bait that wasn’t dead yet. This was respectfully agreed upon by both parties and we left.

The next morning, we were at Diego’s house before eight. Diego was shuffling about but he did not look like a well man. He told Chris that he would not be going out on the boat with us this morning. He had had surgery for a hernia a few weeks ago and it was bothering him. It would not do, he told us, to be on the boat this morning. But there was no problem. Two of his friends would take us out. They knew as well as he where the fish were. It would all work out just fine, we’d see. We’d catch lots and lots of fish.

So we walked across the beach to where one of the men was holding the bow of the panga against the incoming waves and we got wet up to our knees loading the fishing poles and tackle boxes and some food and water we’d brought along—some chips, apples, shortbread cookies. Then we all shoved the panga back and quickly climbed aboard, getting a bit soaked in the process, and the boat floated in the cove just beyond the breaking waves while our two guides attempted to start the rusty outboard engine. They pulled and they pulled and when one got tired, the other gave it a shot, but nothing happened. Meanwhile, Diego was standing on the shore watching us and shouting instructions. After awhile we drifted back toward shore and were caught in the waves and ended up back on shore. Diego rolled up his pants and walked out into the surf and took off the engine’s cover, adjusted this and played with that, then put the cover back on and told one of the men to trying starting it. The engine coughed and belched a white cloud smelling heavily of petrol but after a few minutes it caught and began idling and we headed off towards the distant horizon.

I knew that the bank where the fishermen catch dorado was a good 90 minutes away and thinking of Diego standing on the shore watching us and listening to the engine gasp and choke for life, I started having images of us being stranded far out to sea and floating for days with nothing to eat but shortbread and Doritos. “Which way do you suppose the ocean currents flow out here?” I asked Chris.

“I’m just wondering if it might take us to Puerto Vallarta or to Mazatlan first.”

“I know,” said Chris, “I was thinking the same thing.”

But this was no time to be overly concerned about our safety. We were fishermen. And fishermen sometimes lead a dangerous life. It’s part of the bargain. It was time to start rigging our gear and getting prepared to bring in some massive fish, perhaps even a dorado or two.

Over the wind and the sound of the misfiring outboard engine, Chris shouted at a sullen looking boathand and asked him where the live bait was. The boy, not more than 15 or 16, fumbled around at his feet until he found a covered plastic bucket that had once held lard and handed it forward to Chris who took the top off and looked inside where there was a plastic bag of frozen shrimp.

“Sí, claro,” said the boy. “Diego said you did not want to fish with sardinas congeladas. So we got shrimp.”

Chris nodded. Then he opened his tackle box and began flipping through the plastic pages looking for lures. “This might work,” he said. “It’s not live dead bait but it’s close enough.”

But before he could get his line in the water, the engine died again.