The old man and the sea 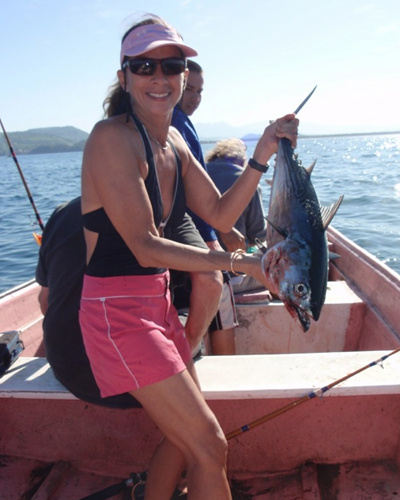 Mechas ungraciously lording her fish over me. Photo by David Lansing.

There were six of us in the little panga. The two boathands, who were busy trying to restart the engine, and four of us fishing: me, Chris, Mechas, and Steve, who lives somewhere in upstate New York and visits his parents who have a house in Custodio every once in awhile. Steve is a very avid fisherman. When I stay at the Fletcher’s house I always see Steve down on the rocks below Casa Corona del Mar surf casting. I’ve never seen him catch anything but I don’t think that matters to Steve. He just likes to fish.

While Diego’s friends were trying to get the engine started, we decided to do a little bottom fishing with the dead live bait. We rigged the lines so there was a weight at the end and then a hook about a foot above that and another a foot higher up. Then we’d put the dead live bait on the hooks. The problem was that the dead live bait seemed very old and tended to fall apart as you were looping it on the hook. Or you would get it on the hook only to have it disintegrate the minute it hit the water. Once in awhile you would actually get the frozen shrimp to stay on the hook and be able to lower it down into the water until you felt the weight at the end hit the bottom.

After about five or ten minutes you’d reel in the line and invariably the dead live bait would be gone. Was this because a fish had stolen the bait or because it had broken off the hook and drifted away in the current? It was impossible to tell.

Finally Diego’s friends got the engine started again and told us we should rig our lines for trolling. They looked at Chris’ many lures and chose one that closely resembled a sardine. Like the live sardines we thought we would be fishing with this morning. But this was just a fake sardine. Which Diego’s friend assured us the fish preferred to the real thing. Why a fish would prefer a fake sardine to a real sardine I cannot say. That is just the way it is.

So we all rigged up and we trolled in a big round-about circle over a shallow reef. We could see fish swimming by the boat—large fish like snappers and jacks and Spanish mackerels and there were fish boils in the sea everywhere we looked. The fish in the sea seemed interested in everything about us except our faux-sardine lures.

I said Steve was the real fisherman of the bunch and sure enough he got tired of trolling with the fake sardines and brought in his line and put some contraption on the end of it that none of us had ever seen before. It looked kind of like a childs bathtub toy. There was a floaty thing a few feet away from the end of the line and then this gadget that looked a bit like a rubber ducky that, evidently, was designed to dive out of the water and then submerge and then dive again. Sort of like a flying fish. Diego’s friends were quite curious to have a look at the thing. They shook their heads and told him it was no good, but Steve was not to be deterred. He let his line out and the rubber ducky did what it was supposed to, jumping up over the wakes and then diving down beneath the water like a dwarf porpoise. Frankly, I think we all thought he was a little nuts, but what the hell. None of the rest of us were catching anything.

Then Mechas, who is also a fierce fisherman (or fisherwoman) decided she’d had enough of the fake sardine as well. She wanted to put on something sparkly and blue that she said she’d had good luck with down in Argentina or Beliz or something. Again, Diego’s friends tried to dissuade her but Mechas was sure of herself. She wanted to try something new. So she changed her lure and let it back out and I’ll be damn if not two minutes later both Steve and Mechas hooked up within five seconds of each other. Chris and I reeled in so as to keep our lines from getting fouled and sat there while Steve and Mechas showed off their fish. I can’t say either one of them was particularly gracious about it. Then Mechas caught another fish and Steve caught a couple more and even Chris caught one. The only person who hadn’t caught anything was me. So Mechas started giving me advice. I needed to change my lure. I needed to hold the pole up higher. I should let more line out. I should jerk the pole every once in awhile. I should change poles. Meanwhile, she and Steve kept bringing in fish.

After awhile I put my pole down and got into the food bag and found a bag of chips. I ate most of the chips and then I ate a pear and then I started working on the cookies. There were even some cold beers.

“Why don’t you fish?” said Mechas.

“You know what? You just need my secret pole. Here, try it. I guarantee you’ll catch something.”

I didn’t really want it but she was kind of insistent so I took the pole that Mechas had been pulling fish in one after the other and I let the line out exactly the way she told me and I held it high in the air as she instructed and after about half an hour or so I hadn’t even gotten a bite. Diego’s friends said it was time to go in. Which was fine with me since we were almost out of beer and chips.