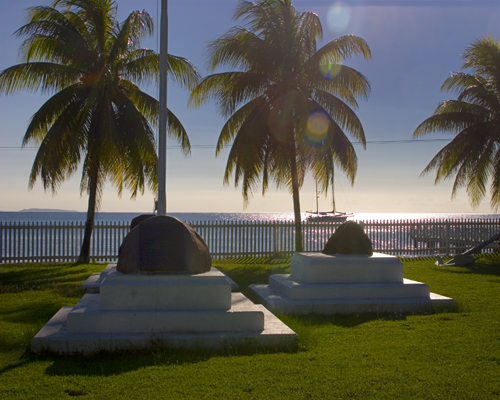 The Cession Monument where Fiji was given to England. See the sloop in the background? Photo by David Lansing.

Since there’s not much to do in Levuka, I spend a fair amount of time just walking about. This morning, after my usual stroll down Beach Street, I continued south of town past the wharf and tuna plant to the Cession Monument, where the Deed of Cession, making Fiji a British colony, was signed by Chief Cakobau in 1874. This wasn’t a pround moment in Fijian history.

Ratu (the name for chief in Fijian) Seru Epenisa Cakobau was born in 1815 and was known as one of the great Fijian warlords. Like his father before him (the name “Cakobau” means “destroyer of Bau”), the Ratu killed this chief and that chief until, around 1865, he had pretty much become the defacto King of Fiji. In 1871, he finally succeeded in creating a united Fijian kingdom and established Levuka as the capital. 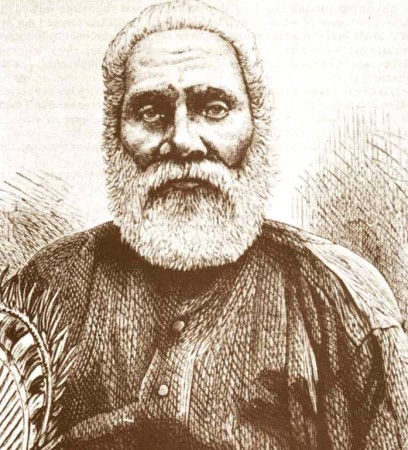 The sad eyes of Chief Cakabou, once the King of Fiji.

But things quickly went south. The U.S. decided that since Ratu Cakobau was the king of Fiji, he was financially responsible for an arson attack against the home of the American consul, John Brown William, on the island of Nukulau and demanded $44,000 in compensation. And just where did the Americans think a Fijian Ratu was going to come up with $44,000 in the 1870s?

Of course, this was just a ruse and a way for the U.S. to assert more power in Fiji. Fearing an American invasion and annexation (just think—Fiji could have become the 50th state instead of Hawaii), Cakobau decided the best thing he could do was cede the islands to the United Kingdom. Which is how Fiji became a British colony for almost 100 years.

Three stones in a grassy little park near the water’s edge mark the signing ceremony that took place on October 10, 1874, as well as Fiji’s independence exactly 96 years later and the 1974 centennial celebration of the Deed of Cession.

You’ll notice in the photo of these stones that in the background is the British sloop I’ve talked about—the one Meli swears is haunted. Strangely enough, I’ve seen the boat anchored at a couple of different spots along the coast while I’ve been here. But I’ve still never seen anyone on board. And no one in town has any idea who actually owns the sloop. Perhaps it’s just another sad reminder of British colonialism on the islands. Like the stones in the park.

Time to move on…