To the clock tower 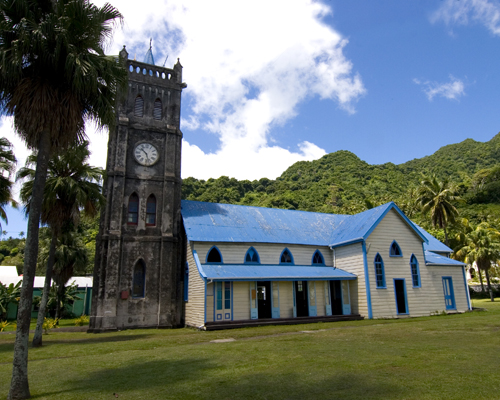 Church of the Sacred Heart in Levuka. Photo by David Lansing.

Just down the street from the Royal Hotel is one of the most beautiful landmarks in all of Fiji, the Church of the Sacred Heart. I love to walk by it in the morning when the rays of the sun coming up over the Koro Sea catch the bright blue tin roof, echoing back the color of the sky and the sea. The church was built by French Marist priests who arrived in Ovalau in 1858 when this was really a rough and tumble town. Here’s how a paper from this time described the atmosphere:

“We have had rows enough during the last week to satisfy everyone for two fortnights, and if broken heads, black eyes and narrow escapes from a Japanese disemboweling with the broadsword, or a few gentle prickings with a fourteen-inch ham slicer are not sufficient to make us all go about with revolvers in our belts, as many of the more cautious do, yet they make us all wish either for a magistrate that would be a terror to evildoers, or for a beacon to sweep the beach of the drink maddened ruffians.”

If you look at the photo of Sacred Heart, you’ll see how the church has this split personality. There’s the modest tin-roofed church, looking very much like a house of worship you’d find anywhere in the South Pacific, and then there’s this rather Gothic-looking stone tower that looks like it was lifted whole from some cathedral in Europe.

The clock tower was actually built 40 years after the church was raised and there are a couple of interesting things about it. First, there’s a green neon light on the stone tower that lines up with another green light farther up the hill and it’s these two lights that help guide sailors into port.

Secondly, the French clock at the top of the tower, which is used by everyone in town to tell time, strikes twice at the top of the hourwith a one-minute pause in between (just in case you missed it the first time). And instead of a chime or a gong, the clock produces a sort of whimsical “thud.” Like a wooden mallet striking a hallow log. Still, I anxiously wait for it each morning around nine. Hearing the odd noise makes me feel that the day has officially begun.