After I posted yesterday’s blog about Tauck’s list of the top 10 ice cream shops in the world (in which I quickly dismissed the Alaska entry), I got an e-mail from a good friend and fabulous writer, Ed Readicker-Henderson, who also happens to be an Alaskaphile (for some odd reason he adores sleet and ice). He abraded my notion that the Frozen North couldn’t possibly make great ice cream, adding, for my edification, that “Alaska has the highest per-capita consumption of ice cream of any state in the country.”

Okay. That’s fine. Except I don’t believe him. It just doesn’t sound logical unless he’s including Inuits eating frozen snow in his statistics of ice cream consumption. Saying Alaskans eat more ice cream than anyone else is like saying Mormons drink more tequila than anyone on the planet. Who’s going to believe that? So let’s move on.

We were discussing whether COWS, based on Prince Edward Island, actually makes the best ice cream in the world as determined by 250 luxury tourism directors. And I say, no, based on my having tasted the ice cream at 7 of the 10 spots on their list. So here’s the “Lansing’s Top Three Ice Cream Spots in the World” (remember I’m playing by Tauck’s rules and going from their top 10 list, even though I disagree with it). 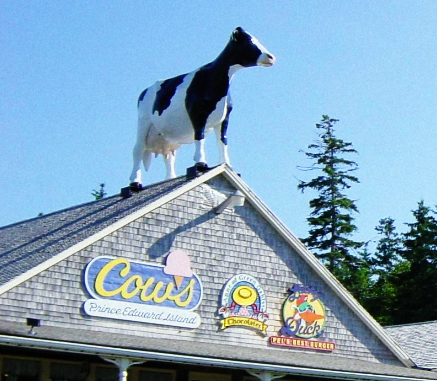 Be careful what you step in at COWS ice cream on PEI.

Number Three: As I said, COWS is pretty damn fine. They get points for using super premium ingredients, like local cream with a very high butterfat content (about 16%) from PEI farmers, pure natural vanilla, and fresh PEI berries. It’s a very, very dense ice cream and not everybody likes that, but it results in a product that slowly melts in your mouth—like a good piece of chocolate.

Downside: I’m not crazy about their Disney-inspired flavors, like Cowrispy Crunch or Wowie Cowie. They make it sound like ice cream for pre-schoolers. I just have a hard time going up to the counter and ordering a big sloppy scoop of Gooey Mooey. I worry it’s going to come with a wipey. 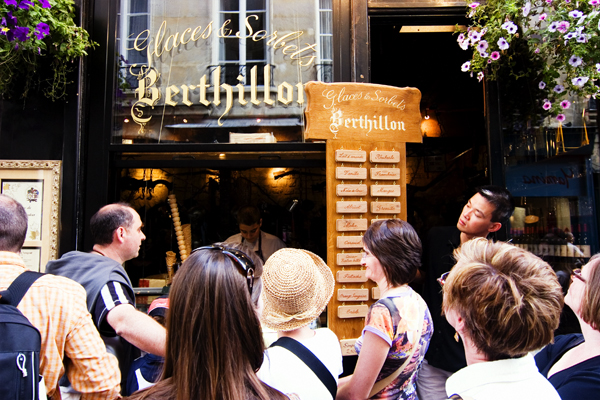 Waiting for a $6 cup of ice cream at Berthillon in Paris. Photo by David Lansing.

Number Two: Is it the setting—the oh-so-charming Ile Saint Louis in the middle of Paris—or the ice cream at Glacier Berthillon? Perhaps a little of both. You stand in line for 20 or 30 minutes waiting to pay over $6 for two small scoops of ice cream and think to yourself, “This is crazy. It can’t possibly be worth it.” And then you finally get to the head of the line and order the pale green pistachio and—after just one taste—realize they’ve ruined it for life. You’ll never be able to eat that glowing-green commercial crap everyone else makes ever again. Because this is the way pistachio ice cream is supposed to taste—dense and nutty and redolent of the most sublime taste of real pistachios. In other words, nothing at all like the faux-pistachio flavoring most ice cream makers use.

Downside: They close in August! Only the contrarian French would close an ice cream shop in August.

Number One: There are so many gelateria in Florence that the city itself should probably get this award. Some of my favorites include Bar Vivoli, near Santa Croce, which can be a little touristy but still makes a fabulous olive-green homemade pistachio gelato, and Gelatamo, famous for their pistacchio di bronte. I find pistachio to be the perfect ice crean flavor because only the best shops use real pistachios, which are quite expensive, instead of artificial flavoring. And the best pistachios of all are Bronte pistachios from Sicily (which is why Gelatamo’s pistacchio di bronte is such a rare treat).

But unfortunately Vivoli and Gelatamo are not on Tauck’s top 10 list, nor is Gelateria de’ Neri, another favorite from Florence. Which leaves us with Perchè no!, which is on their list. And it’s a marvelous gelateria. Everything here is produzione propria, which means “house made,” and they use only the finest ingredients: Bronte pistachios, ricotta cheese, local chestnut honey. When you order a seasonal fruit flavor, like pera, it is made from local pears and so tastes of pears instead of pear flavoring. For a real treat try a semifreddi (meaning “half cold”), like mousse di cioccolato, which has the texture of an exquisitely made frozen mousse. Unbelievable.

Downside: A purist might say that gelato is closer to ice milk than ice cream since, according to the FDA, a frozen product made with less than 10% butterfat can’t be called ice cream—and gelato is never made with that much butterfat (the Italians think too much fat makes it difficult to taste the fresh ingredients like pistachios and pears, and they’re probably right).