In search of soft-shell clams on PEI

The oysters and mussels from Prince Edward Island, along with prodigious amounts of herring and mackerel and snow crab and some two dozen other species of fish and shellfood, are shipped all over the world, but the island’s soft-shell cleams, or longnecks as they’re also called, don’t travel real well. Mostly because they’re so fragile (which explains why they’re called soft-shells).

So the only thing to do is dig them for yourself, which is what I figured I’d do yesterday. I borrowed a shovel and pail from Liam Dolan, a most expert mudder (a mudder being anyone who digs in the coastal mud for shellfish). Now all I needed to do was figure out where in the heck to go clamming.

Now if you ask Liam, who in addition to being an excellent mudder is the proprietor of the Claddagh Oyster House in Charlottetown, where the very best beach is to dig soft-shell clams, he won’t tell you because, after all, that’s where he goes.

But if you compliment him on his seafood chowder which, in the past, has taken first place in the PEI Shellfish Festival chowder competition, which I am here to judge, and then slyly ask him where the second-best beach is, he might suggest that, if you’re serious about it, “You go give the south shore a try.”

Which sounds helpful until you realize that the south shore runs for a good hundred miles. Then he’ll give you an Irish-tinged laugh (which came first to PEI, the Irish or the potato? It’s hard to say), offer to buy you a Guinness and a bowl of soft-shells at the Claddagh Oyster House. Which is exactly what I did yesterday afternoon after spending a very cold, wet morning walking up one windy stretch of beach after another without finding a single clam. 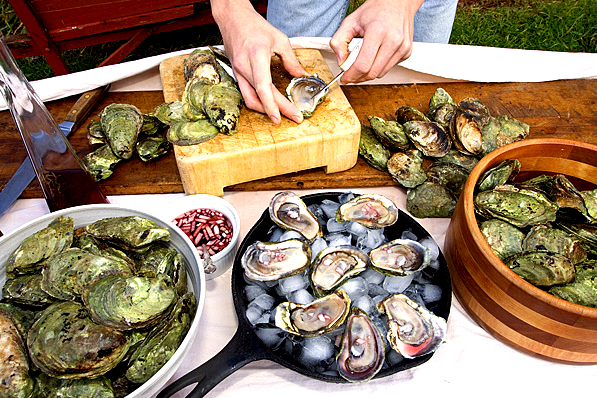 Andrew Chase, the Toronto chef, joined me at Claddagh and after enjoying our first fragrant bowl of soft-shells, we ordered a second. And then a third. At which point our waitress sadly informed us that we’d cleaned them out. “You boys ate everything we had.”

No worries. There were still plenty of PEI mussels to be had. And after that, there was always the 100-count box of Raspberry Point oysters sitting on ice in the bathtub of Andrew’s hotel room.