Negotiating with the women 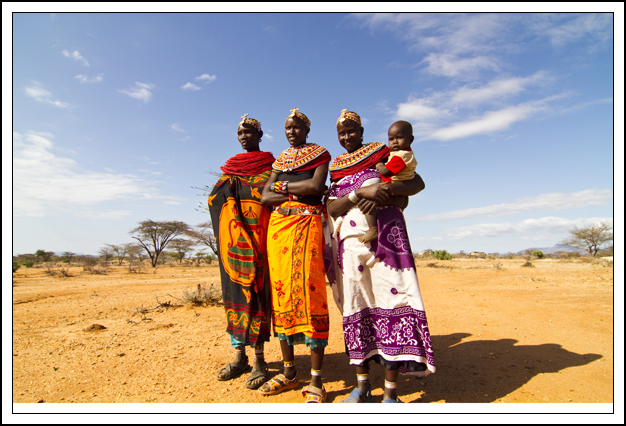 Elegant Samburu women and a child in Northern Kenya. Photos by David Lansing.

The Samburu warriors were so silent and serene while Pete was photographing them, neither shy nor cocky. Just present. And aware.

Pete was moving quickly with these guys because they’re not going to stand there all day for you. They don’t mind letting you do your thing for three or four minutes, but then they’ve had enough and they move off and you can get their hackles up if you press them for more so you just take what you can get and say Asante sana—thank you very much.

But while he was shooting the lmurran three stunning looking Samburu women wandered out from their nkaji to see what was going on. The three women were wearing colorful nkelas and were decked out with elaborate beaded necklaces. One wore an ocher-colored necklace that must have been made up of at least a hundred strands. They all sported beaded crosses in their hairbands and showed the golden rings in their ear lobs that indicated they were married.

These three women could have been the wives of one elder or they could have been sisters-in-law, but whatever their relationship, you could tell they were very tight; if one moved a step to the left, the other two moved in the same direction.

The Samburu warriors were getting bored and Pete had caught the approach of the women, who stayed at a discreet distance from both us and the men, out of the corner of his eye. He asked Calvin if the women would let him photograph them. Calvin said it wasn’t likely, particularly since one of the women had a young child with her. But he would ask.

This is all very tricky. They are beautiful, dignified people. If they are going to allow you to photograph them, you want them to feel good about it and not like they’re being exploited.

Two of the women seemed open to the idea of just a few photos, but the woman in the middle, who was also the most stunning looking of the three, had a bit of Henry Kissinger in her. The negotiations between Calvin and this woman became protracted. 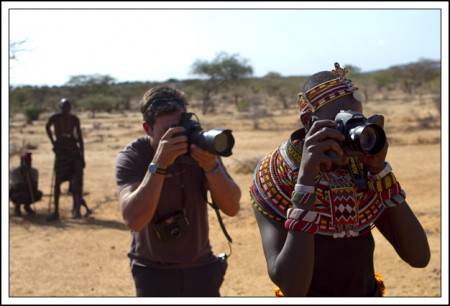 Who's shooting who? Photo by David Lansing.

Meanwhile, I suggested to Pete that maybe one way to make them feel more at ease about the whole thing was for him to let them take his camera and shoot photos of us or their friends or whatever they wanted. So he went up to the woman who was giving Calvin a hard time and showed her how the camera work and handed it to her.

She was magnificent. First she stuck the lens right in our faces, clicking off a dozen or more shots, one right after the other. Then she started taking photos of the two other women. Followed by shots of our vehicle, our feet, the Samburu warriors (who just looked stunned over this whole thing). Then she turned around and started quickly hoofing it off to her village. Which is when Pete went running after her. Wanting to make sure that she didn’t think he was giving her his camera. She laughed when he came running up. I think she was punking him.

But then she handed the camera back to Pete and three of them, looking as elegant as any New York models, lined up side by side and let Pete do his thing.

Afterwards, of course, they all wanted to see the results on his little LCD screen. And, like all women, were critical of the shots, laughing at each other and making it clear to Pete that they didn’t like certain images and wanted them removed.

God, what I wouldn’t have given to have had some sort of portable printer with me so that we could have given them some postcard-sized prints. That would have been priceless. Still, it was a very good afternoon.

Here’s a little 30-second clip of Calvin negotiating with the women and Pete taking their photos.