Hangin’ with the Samburu homies 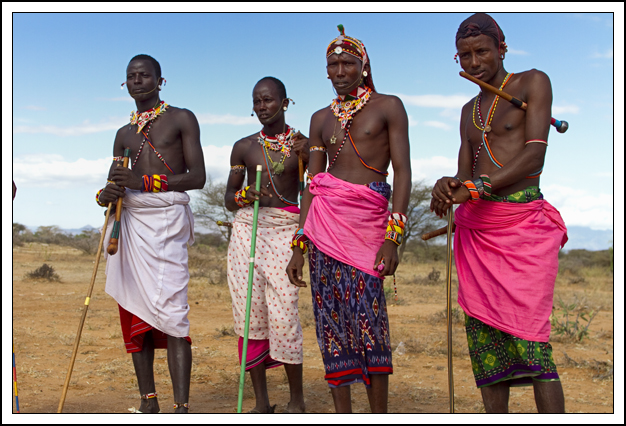 So we’re driving through the bundu, having no specific destination in mind, just hoping we’ll come across a manyatta sooner or later, which seems quite likely since this is the only track out here in the bush and why would there be a road if there wasn’t a village somewhere along it.  And then there, absolutely smack-dab in the middle of nowhere, are four or five Samburu warriors, called lmurran, just standing on the side of the road with their spears and pangas and rungus, those wicked head-knockers, looking like they’ve just been waiting for us.

These guys know how to dress. A couple of them are wearing hot pink nkelas wrapped around their waist, perfectly complementing their patterned purple or green kikois, and they’ve got more bracelets and necklaces on than a movie star at the Oscars. Ivory plugs are stuck in their stretched ear lobs and they’ve got beads and bangles and cowrie shells and feathers stuck in their ocher-smeared hair.

I mean, think about it. These guys aren’t going clubbing (well, maybe they are, but not in the way we think about it). They’re not dressed to go out on a date. This is just the way they look. Every day. Sharp. Stylish. Decked-out.

Now there’s no doubt that it is not easy being Samburu. The word “harsh” pops up a lot when people talk about the country they live in. As do the words “volcanic,” “dusty,” and “thorns.” 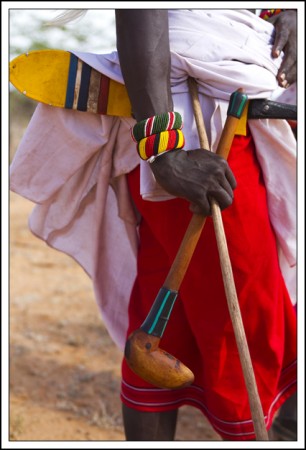 Always carry your panga and rungu when you're out with the boys. Photo by David Lansing.

They live in a hut made of mud and sticks called a nkaji which is no more than five feet in height and has no windows (though there is usually some sort of latticed affair to let out the smoke from the fire, which is built inside without a vent). The roofs are sealed with cow dung and covered either with hides (old-school) or gunny sacks (the modern improvement).

They live on a sort of maize porridge called posho or ugali and a nasty mix of cow’s blood and milk that they ferment in a long gourd, called a nkarau, which is guaranteed to infest most Westerners with parasites that can take a good year to clear out of your gut (just ask my photographer, Pete McBride). Once in awhile—usually on a special occasion, like a birth or marriage—they’ll kill one of their prized cows or goats for a little meat.

So, like I said, it’s not easy being Samburu. Still, if you’re going to be born a Samburu, you want to be a guy. Because their main job is to do what the four lmurran were doing when we came by: Stand around and look good.

The women build the houses. The women collect the firewood. The women take the donkeys to go get water, cook the posho, cure the animal hides, care for the children, milk the cows, aid the birth of totos (animal and human alike), make cooking utensils, weave the ornaments, hollow out and smoke the gourds used to store food, and keep things tidy and clean around the village.

The men take blood from the cattle (which are usually tended to by young boys). And slaughter a goat once in awhile. That’s about it.

Did I mention that the men also have two or three wives? So they have to spend a lot of time, you know, servicing everybody. It’s exhausting. No wonder these guys looked pleased to see us when we came by. No doubt we gave them something to do for the day besides just stand around looking good.