There’s something decidedly Twilight Zone-ish about going to Niue. For one thing there’s only one commercial flight a week in and out of the island. For another, to get there you fly out of Auckland, New Zealand, at 10pm Friday night and, after a four-hour flight, arrive in Niue 20 hours earlier than when you left (which is to say at 2am Friday morning). Try and figure that one out.

Despite arriving in the middle of the night, half the island is hanging around the airport, which is really nothing more than a small wooden building with a corrugated roof. It seems that if Niueans aren’t here to pick a relative up, they’re there to send one off (the Air New Zealand flight doesn’t even cut their engines; in a scene straight out of Casa Blanca, they dump their passengers as quick as they can, load the plane up, and high-tail it out of there 40 minutes later). It also seems that a fair amount of islanders go to the airport on Friday night the way people in other cultures go to clubs or the cinema—as a form of entertainment. When I arrived, there were all these families and young kids running around, picnicking on fried chicken and throwing the Frisbee around with the dog, even though it was 2 in the morning.

A van picked me up and drove the 10 or 15 minutes to the only real hotel on the island, the Matavai Resort. At 2:30 in the morning, there wasn’t a single light on anywhere in the hotel. Instead, a very prim and proper Niuean, named Heme, was standing rod-straight behind the front desk, oddly illuminated by the yellow light of a half-dozen or so hurricane lamps. Heme, who spoke with an Indian accent, wore a frangipani flower behind his right ear. 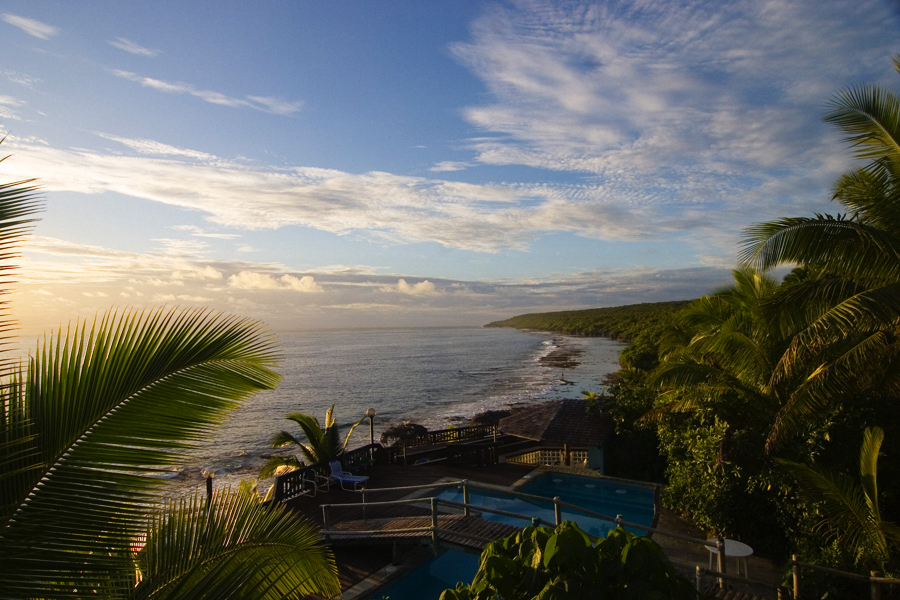 “As you see, we have no electricity,” he said, smiling broadly, as if he’d just performed a successful magic trick for me. Then he handed me the following note, which he’d obviously carefully handwritten himself:

“Notice from the official Matavai management: The spare part hence needed to repair the burned-up generator has to be flown from the U.S. to N.Z. Getting it to Niue posses another set of problems particularly if the weekly flight out of Auckland just happens to be full, as it always is.

“The predicted result is that we are likely to continue to experience disruptions to the power for the coming week or month. That’s the bad news; the good news is that, with many thanks to the council government, we now know well in advance when the power will be cut and will provide you that information on a prompt basis so as to plan your stay accordingly. Thank you for your understanding!”

“Did the spare part come in on my flight?” I asked Heme. He smiled and shook his head.

“Maybe next week,” he said, cheerfully. I asked him how long they’d been waiting for the part and he said two or three months. Maybe longer.

It seems that the entire island is powered by two diesel generators. Or was until one of them mysteriously caught fire a few months ago. Now the only source of electricity is the surviving generator. So the island is divided into quarters and every section gets electricity for approximately six hours a day, determined by some sort of rotating basis that, as best I could figure, somewhat resembles the spin of a roulette wheel.

“Can you tell me when the power at Matavai will be back on?” I asked.

He shrugged. “I’m sure I have no idea,” he said. “Maybe at six. Maybe at noon. Yesterday we got no power at all.”

And with that, he handed me a hurricane lamp and told me my room was out through the garden and up the stairs and to be careful that I didn’t step on a sea snake or an uga.

I was too tired to ask what an uga was or why there might be sea snakes hanging around my bungalow. By now it was three in the morning and was a brisk 80 degrees with at least 80 percent humidity. My polo shirt was drenched and sticking to my skin. The idea of making my way upstairs in the dark to a black, airless room (there was, of course, also no air-conditioning)—one possibly already inhabited by sea snakes or ugas—seemed like a foul idea. Instead, I dragged my luggage through the garden, aware of the high-pitched hum of mosquitos, cicadas, and a host of other unseen insects, to a bruised oval, only slightly illuminated by moonlight, that I took to be the pool. I striped down to my boxers and eased myself over the edge. The water was only slightly cooler than the night air but nonetheless felt refreshing.

And so I spent the next several hours. Floating in a dark pool in the inky, hot night, watching the nighttime drama of small silhouetted animals—geckos? snakes? ugas?—chase each other up palm trees or into the dense vegetation, waiting for the sun to come up. When the first orange glow crept up out of the ocean, I got out of the pool, grabbed my luggage, and found my way to my room where I came across several geckos but no sea snakes. I slept like the dead until awakened by the startling rattle of my ancient air-conditioner coming to life. It was just noon. Evidently the power was back on. At least for a few hours.