Shopping for a wife at Berlin’s Hotel Adlon 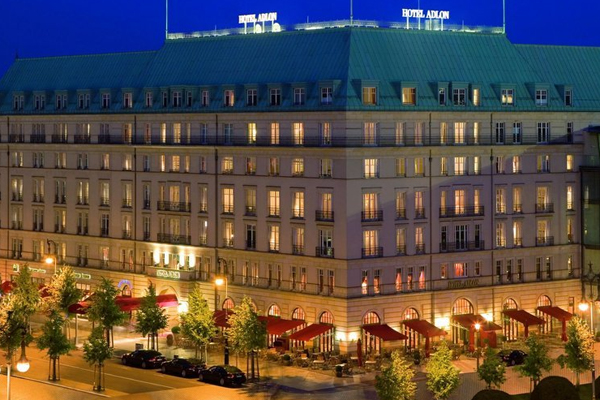 Just my luck. I arrive in Berlin on what looks like prom night. As Herr Lubo struggles with my bags through the Hotel Adlon Kempinski lobby, I pass through groups of loud Berliners in monkey suits and taffeta gowns. But wait a minute…now that I take a closer look, these aren’t kids at all. Youthful, yes, but not teenagers. The men have a little chin hair but they’re decked out in black Armani and toasting each other with glasses of sparkling Sekt.

And the women! The women! They’re tall. Blond. Classy looking. No bullet bras, buffalo boots, or bare bellies. Instead, they look like gorgeous actresses at an awards ceremony showing off their gowns to the paparazzi. I don’t know my couture so bear with me here, but they are draped in delicate, sexy, beaded, spangly things. Sheaths of silk layered like wearable phyllo dough in bright colors—magenta, mustard, chartreuse. Chartreuse for chrissakes!

“What’s the party for, chief?” I ask Herr Lubo as we zigzag through the crowd towards the elevator. He puts a finger to his lips, wags his head, and murmurs, “No, no, no.” Like I had just asked him if there were any hookers in the bar.

Whatever is going on, Herr Lubo isn’t talking. So I wait until he has shown me how to operate the lights in my room before sneaking back down to the lobby where I follow the musical bread crumbs of a string quartet playing Beethoven just inside a ballroom. Outside the door, sitting behind folding tables, are three very young, very beautiful, very serious Fräuleins, all in little black dresses with bare shoulders, who seem to be in charge of the soiree check-in. They offer dazzling smiles as they jump up to block my approach to the door, allowing me little more than a peek inside the ballroom which is decorated like an English garden with potted roses and topiary bushes in the shape of hounds and foxes. They know I don’t belong, not with my leather bomber jacket and dusty Doc Martens.

“Was ist los?” I chirp, ridiculously imagining that they will be impressed by this American speaking bad German. “Eine cool Gesellschaft, eh.” The Fräuleins give me one of those tight Bavarian grins but do not budge.

A matron accompanying two young things in extremely low-cut gowns that display the vixens’ goods as if they were perfectly ripe cantaloupes at a farmers’ market, explains in beautifully fractured English that this is a debutante ball following a big polo tournament in Berlin. “It’s ze vay for a zertain class of vimen to find der Verlobte.”

She sees from my glazed eyes that I am not getting it. Her cosmetically-etched eyebrows arch toward her widow’s peak as she whispers, “A husband. Verstehen Sie?”

Ah. I understand perfectly. Aristocratic German men are shopping for feminine accoutrements to go with the castle in Bavaria, and the Hotel Adlon is their Ikea. And then die Mutter hustles her voluptuous daughters into the ballroom, presumably to find husbands of their own.

What the heck is going on? I came here because Hardy told me Berlin was the hippest city in Europe these days. Yet no sooner have I arrived then I’ve stumbled upon a bacchanalian party of Teutonic Gatsbys who’ve just changed out of their jodhpurs and into Italian loafers so they’ll be more comfortable looking over the little two-legged fillies fresh on the market.