Snorkeling in the deep end of the ocean 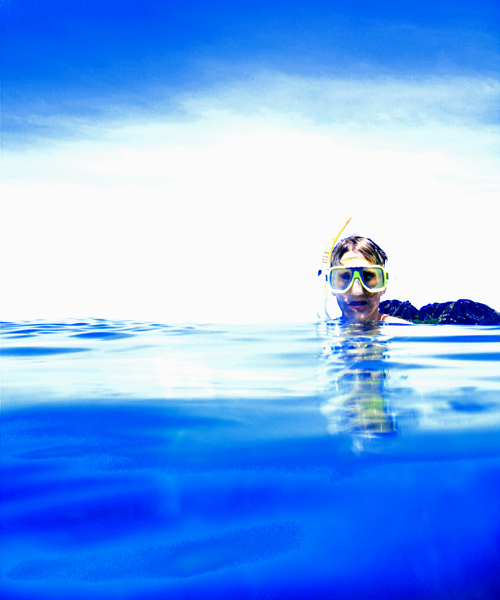 Snorkeling in the deep end of the ocean. Photo by David Lansing.

At this point I started to get a little kink in my neck, mostly because my head was bent at an odd angle while trying to swim and stare at Heidi’s hini at the same time. I dog-paddled, pulling out my snorkel and lifting the mask off my face. We’d really drifted. Abel was standing up in the dive boat, whistling and waving his arms over his head to get my attention. The wind had come up and the ocean was rolling. I couldn’t hear what Abel was saying but I knew he wanted us to swim back towards the boat. I waved back to let him know I got the message, then cleared my mask and stuck my head back under the water looking for Harry and Heidi.

They were nowhere in sight.

My mother had this rule when we were children: If anyone gets separated from the rest of the group, stay where you are. Do not get clever and try and figure out where the others are because you’ll only get more lost. Instead, stay put. And that philosophy has always worked pretty well for me (although there was this one time on a train in Switzerland when I fell asleep and when I woke up, everyone was gone so I just stayed where I was and next thing you know, the train had crossed into Italy).

But what do you do if you are in the middle of the ocean a good 15-minute swim from an anchored dive boat that seems to be getting smaller and smaller as you drift away in a strong current and your diving partners, who, you imagine, are somewhere up ahead of you—even farther from the boat—have disappeared completely? Staying put did not seem like a good option. So I started swimming off in the direction I figured Harry and Heidi would have gone, following the reef wall that curved gently to the left farther and farther until…it just ended. And there ahead of me was an outerspace of deep green water.

Which is when I remembered something Abel had said just before Harry, Heidi, and I slipped off the side of the dive boat: “There are strong currents in the passage running into the open ocean from the reef. Do not follow the wall into the open ocean. You’ll end up in Samoa.”

He was right about this current. It moved like a river. And the swells were getting bigger. The dive boat was nowhere in sight.

I’ve only gotten seasick once in my life. That was in a storm off the Canary Islands when I was strapped into a theater seat in the hold of a cargo ship that tossed and turned so violently that, while I vomited, the strap from the restraining belt cut deeply into my skin. That was bad. But I’d have to say that throwing up in the open ocean is worse. For one thing, there’s nothing to hold on to. For another, it seems to attract a sudden crowd. I would never have guessed that barracuda like regurgitated bananas, but evidently they’re game.

Harry was the one who pulled me by my arm back to the dive boat, but Abel said it was Heidi who spotted me. “I was thinking not good things, Mr. David,” Abel said. “But Miss Heidi see you soon enough.”

She smiled at me and patted my pale arm. “You gave us a scare,” she said like a reproachful mother. “That’s why you need a dive buddy when you’re snorkeling.”

I smiled weakly and put my head back on Heidi’s lap. She smelled of coconut and citrus. Harry pulled a red beach towel out of his backpack and spread it over me. “You’re shivering,” he said. Then, noticing me gazing at the lettering on the towel—their names along with what I assumed to be the date of their marriage arranged inside a white heart—shook his head sheepishly and said, “I know. Hokie, huh?”

“Not at all,” I said, closing my eyes as Heidi placed a cool hand on my forehead to shade me from the sun.

That night the three of us had dinner together. Heidi wore a cute white top with NEWLYWED spelled out in silver sequins across her breasts. I thought it was charming.