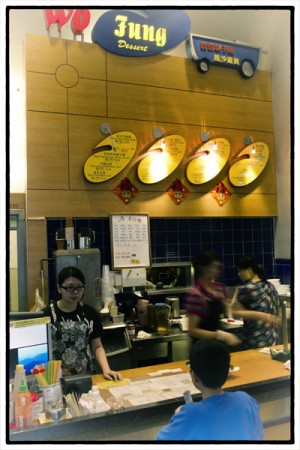 Wu Fung Dessert in the Aberdeen Centre, Richmond BC. Photo by David Lansing.

Here’s what I’ve learned about Mijune: If she suggests you go somewhere to eat, just go. Even if it doesn’t sound like your thing (think chicken feet or frappé).

Today she says, “I have a craving for Wu Fung.”

Okay, again: I don’t do chicken wings and I never do deep-fried fast-food. “Chicken wings?” I say. “Seriously?”

Mijune doesn’t even listen to me anymore. Just as well.

But before we bite into our chicken wings, I have a question to ask: What is it with Asian places giving fanciful names to eateries that have nothing to do with what they serve?

For instance: Yesterday Mijune and I were walking around getting all hot and thirsty so we stopped at a place called the Cherry Juice Company. And guess what? They don’t serve cherry juice.

Wu Fung, as you can see from the picture, is actually called Wu Fung Dessert. Would it shock you to discover they don’t sell any desserts (unless you consider soy sauce hard-boiled eggs to be a dessert)?

Somebody please write and tell me why they do this.

Anyway, back to Wu Fung. Once again, Mijune was right. These puppies are meaty and flavorful, the crust crisp but also kind of puffy, sort of like a fish & chips batter, with a slight taste of ginger in it. A little oily (get them out of the Styrofoam container they’re served in as soon as possible) but positively delectable. They reminded me of some Hong Kong street food I had once.

Oh, and get the lemon tea. It’s just as good as the chicken wings and the perfect accompaniment.

Bliss in the form of a Frappé 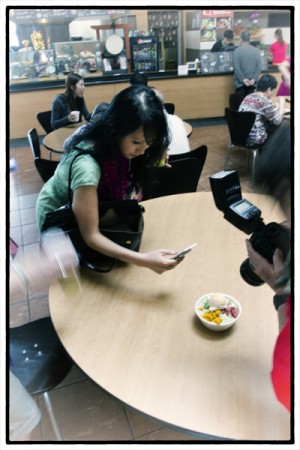 Mijune shoots our frappe bliss before we devour it. Photo by David Lansing.

I don’t do dessert. I just don’t. So when Mijune suggested that after we finished our chicken feet at Fisherman’s Terrace we head up to the food court in the Abderdeen Centre for some Taiwanese-style shaved ice, I told her to go on ahead.

“You should try it.”

“First of all, I can’t eat another thing. And secondly, the last thing I want right now is shaved ice. I hate shaved ice.”

“It’s not really shaved ice,” she said, grabbing my arm and dragging me towards the escalator. “It’s frappé.”

I haven’t known Mijune long but obviously what Mijune wants, Mijune gets. She was going to drag me kicking and screaming like a two-year-old to the food court.

“But it’s not really ice,” she says as she barks out instructions to some kid behind the counter for what she wants. “It’s actually frozen milk.”

Anyway, Mijune orders a big bowl of green tea frappe with fresh mango, kiwi, and strawberry and a scoop of ice cream on the top. Then, after we get it, she whips out her cell phone and starts taking photos. While the whole thing melts. Which is just fine with me since I’m not going to have any of it anyway. Finally, she dips a plastic spoon in to the bowl and takes a tiny little bite.

“Oh-my-god,” she murmurs. She looks up at me but I ignore her. She plays with the spoon in her mouth, as if she’s licking off every last drop. “Oh, David,” she moans. People are looking at her. It’s like that scene in the diner in When Harry Met Sally—she’s having an orgasm at the Aberdeen food court.

The frappé is ethereal. Remember when you were a kid and the first snow of winter would fall and you’d go outside and lift your head up to the sky and catch a single solitary light-as-air snowflake on your tongue and it would instantaneously melt and make you giggle?

That’s what this dessert tastes like. Silky, fluffy, feathery snow. With flavor.

“Stop eating all the frappé,” I tell Mijune, pushing her plastic spoon out of the way. She smiles. “Should I get another?”

“If you want any you should,” I tell her.

And off she goes to Frappé Bliss. While I close my eyes and spoon into my mouth each delightful bite of the green tea-flavored feathery frozen milk delight.

How to eat chicken feet 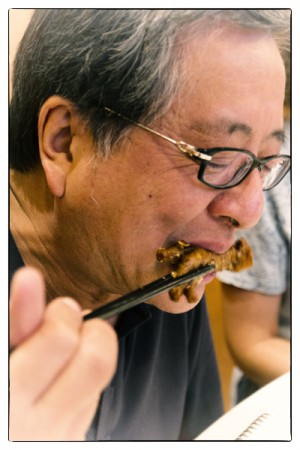 David Lang showing the proper method for eating chicken feet. Dangle the toes out of your mouth. Photo by David Lansing.

So anyway, about those chicken feet. You know how you can bite into something like a kogi taco and go, Ohmygod, that is so good!

Well, you’re not going to do that with chicken feet. I guess for some people chicken feet might be comfort food. You know, particularly if you lived on a farm in China and had a hundred chickens running around and you had to feed the chickens and then your dad, maybe once a week, put a dozen or so chickens in a wire cage and took them to the local market to be sold alive, and your reward for feeding the chickens was to have your mom make you steamed chicken feet on Sundays.

But none of that ever happened to me so I don’t have those chicken feet memories. I don’t think Mijune does either.

Anyway, I ate the chicken feet. Not much to it. Little bit of meat around the ankles (do chickens have ankles?) and then you could kind of suck on the toes if you wanted.

David Lang, who moved to Los Angeles from Hong Kong 18 years ago, liked the chicken feet more than I did. He ate several of them.

“You not going to eat more chicken feet?” he’d say. We’d all shake our heads. “Okay then,” he’d say, grabbing for another one, using his chopsticks to stick the skinny leg part in his mouth first so the toes dangled from his mouth like the fingers of a baby’s hand. I think I liked watching David Lang eat chicken feet more than I liked eating chicken feet. But that’s just me. 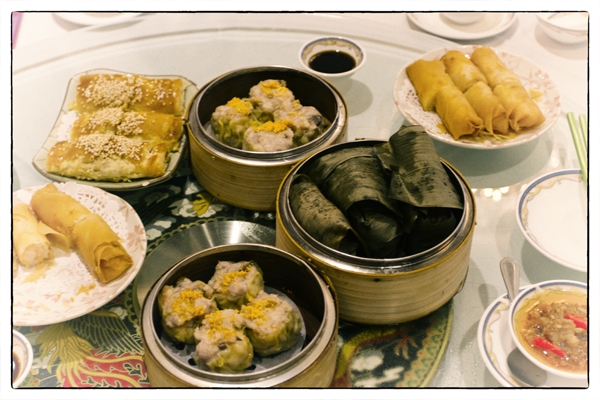 Slipping inside Richmond’s Aberdeen Centre in search of Fisherman’s Terrace, I feel like I’ve been transported to Hong Kong (it’s named after the famous Aberdeen Harbour in Hong Kong). There’s a large Daiso, the $2 Asian bargain shop, and little shops selling bubble tea and Chinese beef jerky and herbal stores selling shriveled up god-knows-what for whatever ails you.

When I walk into Fisherman’s Terrace a minute or two before ten, there’s nobody there. I mean nobody. I wonder if perhaps I’ve got the wrong restaurant. Or if Mijune is just messing with me.

But a couple of minutes later, she shows up wearing an absinthe-colored short dress and matching green stilettos. She’s also brought a couple of other foodie bloggers with her, David Lang and Amy Sherman. I guess I’m not the only one hoping to have chicken feet with Mijune.

It arrives in a whirlwind of plates. I want to try the chicken feet first but Mijune won’t let me.

“Always start with the shrimp dumplings,” she says, dropping one with her chopsticks on to my plate. “You see how good these are?” she says before I can even taste one. “They don’t stick to the paper in the steamer. And they have lots of crow’s feet on them. Like at least seven. And look how translucent they are—you can see how delicate the dough is.”

“Of course,” she says, laughing. “But try it with the XO sauce, which is excellent here. In fact, the XO sauce here is so good I sometimes could just eat that.”

And it is an excellent sauce, with lots of dried shrimp and dried scallops floating in it. But the shrimp dumplings are even better. 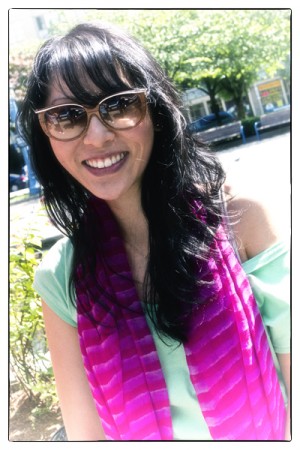 The girl in the purple stilettos, Mijune Pak. Photo by David Lansing.

The last time I was in Great Britain, I spent two weeks searching for the best fish & chips in Scotland which ended up coming from a trailer on the pier in Tobermory. Well, that story is going to end up in Islands magazine in September (I hope you’ll look for it).

So last night I asked The Girl in the Purple Stilettos at Shanghai River Restaurant what the best places for dim sum were in Richmond.

“This is very good,” she said.

She smiled. “It depends on what you are looking for and how adventurous you are. Do you like chicken feet?” she asked.

I told her I’d never had chicken feet. But I was up for giving them a go.

“Meet me at Fisherman’s Terrace tomorrow morning,” she said. “At ten. We will have chicken feet.”

By the way, The Girl in the Purple Stilettos has a name. It’s Mijune Pak. She also has her own foodie blog site called, appropriately enough, Follow Me Foodie. So tomorrow morning, Mijune and I are going to share chicken feet. And perhaps much more.