We drive for almost an hour along the perilous eastern coast of Jura along a gnarly track, known as “The Long Road,” that has even Charles holding his breath from time to time as the car dances on the edge of one precipice after another out over the sea. Finally we come to the end of the paved road and a gate with a sign forbidding vehicles to venture any farther. Waiting for us on the other side of the gate, leaning against a very beat-up and muddy Land Rover, is Mike Richardson.

“I’ve got to put the bloody sign up to keep igits from taking their rental cars up here,” says Richardson, who will turn 74 in September. “There’s no way they can make it on this road and then I end up having to tow them out.”

The road Richardson refers to is really nothing more that a nasty rough track full of gouged holes a foot or more deep and grass knee-high in places. As we bounce along at 5 miles per hour, Richardson says, “This road is exactly the way it was when George drove his Army BSA motorbike over it 60 years ago. In fact, it might have been better back then.” 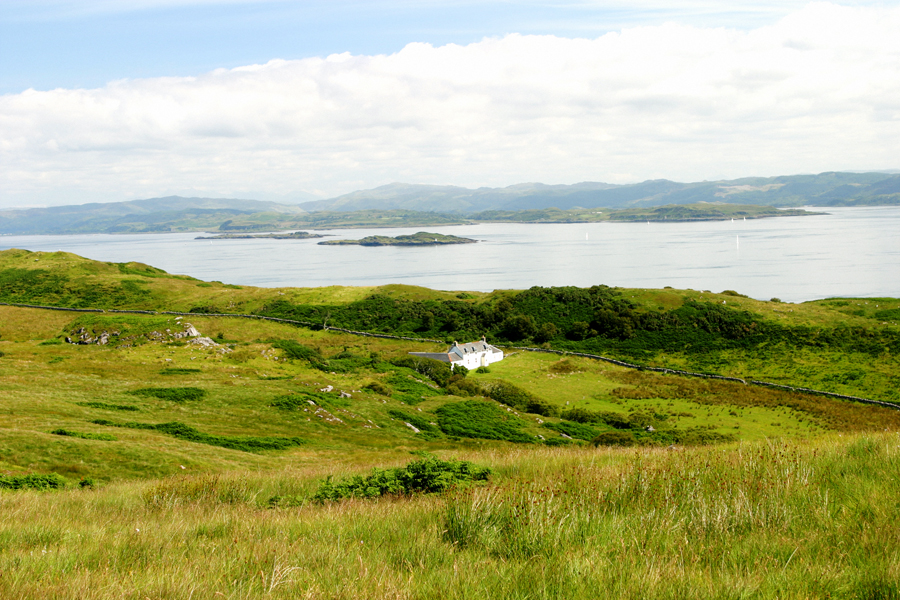 The George he is referring to is George Orwell, who came to Jura in 1946 to write his last novel, a book with the working title The Last Man in Europe (which ended up being published as 1984). According to Richardson, Orwell was looking to get as far away from civilization as possible—which is why he picked the wild and unpopulated stretch along Jura’s eastern coast.

“He was a wounded animal looking for someplace to hide,” says Richardson of the author and war correspondant, one of the first journalists to enter the German concentration camp at Bergen-Belsen. “What he saw there made him lose faith in mankind. He couldn’t comprehend the horror. And shortly thereafter he wife, Eileen, died, quite suddenly after a botched operation, and he was quite ill from the tuberculosis that would eventually claim his life at the age of 46 in 1950. So he was a man at the end of his rope, in a way—a bit of the last man in Europe himself as he saw it.”

After about 40 minutes or so we make it the five miles to Barnhill, the old white stone house built in the 1850s, where Orwell lived from May 1946 to January 1949. Richardson takes me upstairs to the bedroom just above the kitchen where Orwell spent most of his time at Barnhill hammering away on his typewriter.

“It was his bedroom,” Richardson says as I look around at the cramped space, “but he didn’t sleep here. He preferred sleeping in an army tent in the garden. Thought the fresh air would do him good. More likely it made things worse.” 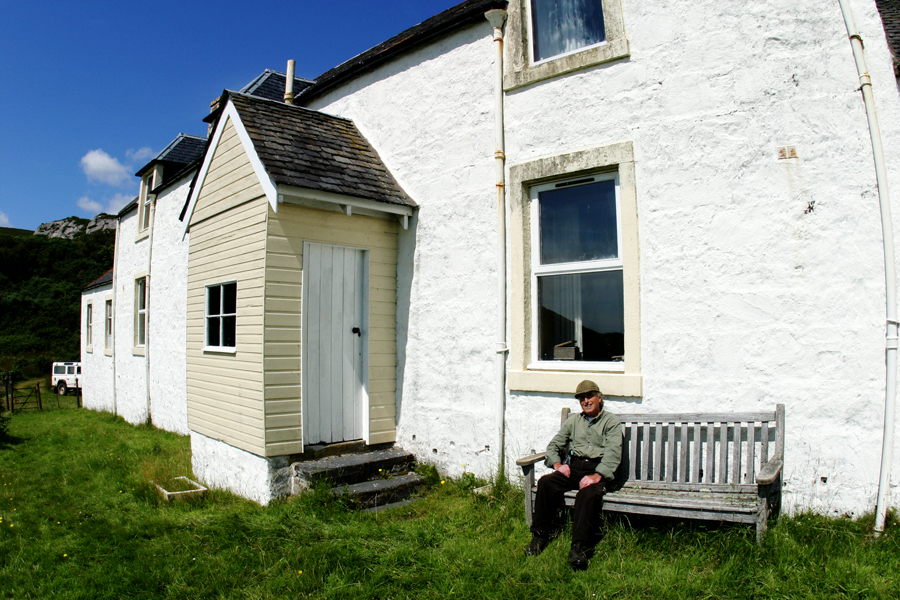 Mike Richardson in front of Barnhill where Orwell wrote "1984."

Later we sit on an old wooden bench in front of Orwell’s house looking out at the stone field walls, probably erected during the Bronze Age some 3,000 years ago, and the cherry trees Orwell planted and the bay from which he launched a 14-foot dinghy and tried to circumnavigate the island only to capsize just up the coast at the treacherous Corryvreckan whirlpool where he almost drowned. Or at least that’s the conventional version of the story. Which Richardson says with a wave of his hand is nonsense.

“Bullocks. He wasn’t anywhere near the Corryvreckan,” he says. “He was with his son and they were headed for a small island along the west coast to collect puffin eggs and when they stepped out of the boat, it capsized and they were stuck on the island for three hours until a fisherman picked them up. That’s the real story.”

Then why, I ask him, do people always talk about Orwell almost drowning at the Corryvreckan whirpool?

Richardson says, “Makes for a better story, I suppose.” He gives me a wink. “And you know how the Scots are with their stories.”