Why we can’t shoot Samburu 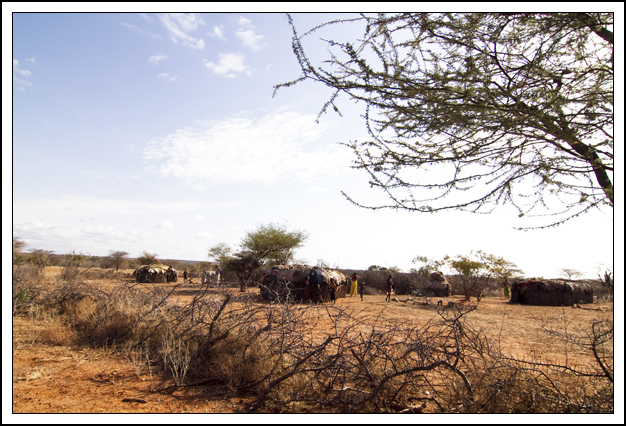 A Samburu manyatta off the Namunyak Conservancy land. Photos by David Lansing.

A bit more controversy this afternoon with Piers, our host here at Sarara Camp. Calvin suggested at lunch that rather than going out looking for Grevy’s zebras or, god forbid, more birds, perhaps we should go check out a local manyatta, a manyatta being the Swahili word for the settlements the Samburu live in which usually consist of maybe five or six houses built in a rough circle surrounded by a thorn bush fence.

That got everyone’s approval. Until Piers pulled Calvin off to the side and informed him that while it was perfectly fine with him if we went and visited a manyatta, there could be no photography.

But, Calvin argued, the boys are here to do a story for National Geographic Traveler. What’s the point of visiting a manyatta if the photographer can’t do his job? 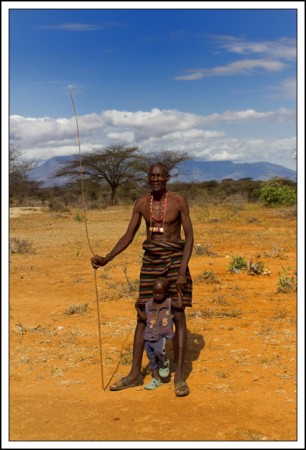 A Samburu mzee, or elder, with a toto. Photo by David Lansing.

Sorry, said Piers. I’ve had the BBC here and all sorts of folks and absolutely nobody is allowed to visit a Samburu village within the conservancy and take photos. The problem, he told Calvin, is that if you take photos of the Samburu, they’ll want money and then you get into the whole thing of guests going through the villages and everyone has his hand out in supplication. They become beggars.

On the one hand, it’s very hard to argue with Piers’ reasoning. Nobody wants to turn the Samburu, who are a very proud people, into bush beggars.

But on the other hand, why is Mzee Piers deciding whether the Samburu at a manyatta should have their photo taken or not? It’s like he’s dad and the Samburu are his children. Which is exactly what Africans hate about mzungus—they’re always trying to tell the natives what they can and can’t do.

Look, said Piers, you can go and visit the manyatta and you can take some of my Samburu staff with you and you can take their photograph at the village. Just as long as none of the local Samburu are in the picture.

Well, yes, and we could have gone to the zoo and taken a photo of an aardvark and I could have Photoshopped it into a background scene of the Mathews Range and said I’d seen another species of the Small Five (which I haven’t) but that would be no good—hapana m’uzuri.

So in the end, we compromised. We promised Piers we would not go to a Namunyak manyatta and take pictures, and we didn’t. Instead, we went to a manyatta outside of Namunyak. And there we had a splendid afternoon. Taking lots of photos.