Satanic rituals at the Masonic Lodge 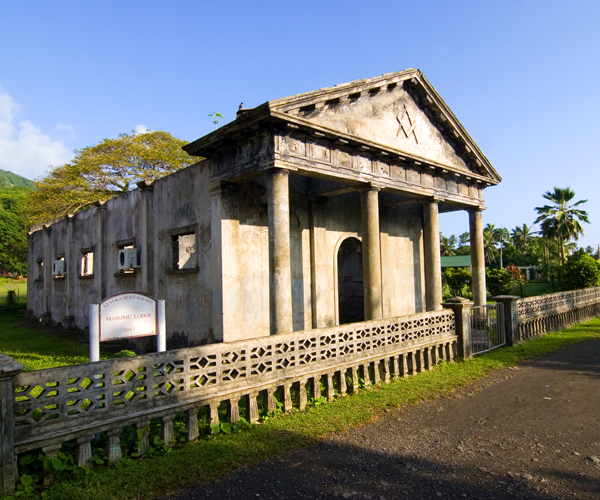 What’s left of the old Masonic Lodge in Levuka. Photo by David Lansing.

I mentioned the other day an odd comment my ersatz tour guide, Meli, made in regards to things burning up in Levuka. So yesterday when I ran into him cutting down bananas with a machete in the garden, I asked him about it. He stopped work and dabbed at his forehead with a greasy bandana and said, “Come. I show you.”

We walked up the road along the large park behind the hotel where young boys are always playing soccer to the edge of the field where a small, Greek-like building stood. Or what was left of it.

“That the ol’ Masonic Lodge,” Mali said, standing before it with his hands on his hips. And then he told me this story:

In 1875, a sailing captain named Alexander Barrack established Freemasons in Levuka and, 38 years later, built the Masonic Lodge in a classic Greek style. But not everyone in Levuka was crazy about the Freemasons. Many of the local Fijians thought there was just something a bit odd about these guys (and to think this was almost a hundred years before Dan Brown and his angels and demons).

In fact, the word in town was that Freemasons were satanic and held strange rituals inside the Lodge (which would be true if you considered drinking copious amounts of gin with a bunch of other men while playing croquet to be a strange ritual). There were even stories that secret tunnels ran beneath the Masonic Lodge to the Royal Hotel or to Nasova House, near the Cession Monument, south of town.

“Some say the tunnels go all the way to Scotland,” Meli told me.

So even in Fiji there are conspiracy theorists. But how did the Lodge burn down? I asked Meli.

Up in the mountains above Levuka are the original inhabitants of Ovalau. They live in a little village called Lovoni and they have always been known as mean, protective, superstitious people. In fact, for years, members of the fierce Lovoni tribe would sneak into town every few years and try to burn it down, which became a bit annoying to the Europeans. They did this right up until 1871 when they were tricked into a truce and then rounded up and sold to European plantation owners as laborers (i.e, slaves). In 1875—the same year these devilish European white guys started the Masonic Lodge—the survivors of Lovoni were allowed by the British government to return to their valley but told to behave themselves. Needless to say, they weren’t too keen on white guys at that time. And still aren’t.

Anyway, in 2000 there was a coup in Fiji (they seem to have one every few years, whether they need one or not) and the villagers of Lovoni, still a little pissed off from what had happened to them in 1871, marched into town with torches and machetes yelling, “Out with the devil!” and burned down the Masonic Lodge. Needless to say, they found no signs of satanic rites inside the building. Nor did they find any trace of the tunnels said to run under town. Just, you know, some Masonic symbols representing equality and mortality as well as some charred croquet mallets.

Which doesn’t mean local Fijians still don’t think there’s something not quite right about the whole Freemasons business (and I’m sure they’re right). Just yesterday I came across an article in the Loyal Fijian, an independent news service “by Fijians for Fijians,” that reported that “Freemasonry extends its tentacles through all levels of society and freemasons have managed to infiltrate into the highest levels of commerce, public service, and politics.

“In Levuka, where the Freemasons had their headquarters (until the lodge was burned down by 300 hysterical crazy people, the article forgot to mention), the mysterious death of Mr. Erasito has never been explained or the perpetrators brought to justice. Erasito was found completely naked behind Levuka Public School with puncture wounds to his body, after a gathering of prominent Freemasons from across Fiji and overseas.

“The Police files have also disappeared as this correspondent found out when he traveled to Levuka to attempt to unravel the mystery.

“After the 2000 coups, residents of Levuka burnt down the Masonic Lodge as villagers believed human sacrifices had taken place there.

“It should be noted the freemasonry has been banned from public life in Britain where it started as numerous cases of corruption and nepotism piled up against members who were looking after their own.”

I wonder if Dan Brown knows about this Mr. Erasito in Levuka who ended up naked and dead with lots of little puncture wounds after a gathering of Freemasons? Sounds like a good book, don’t you think?