The fountains of Somerset House 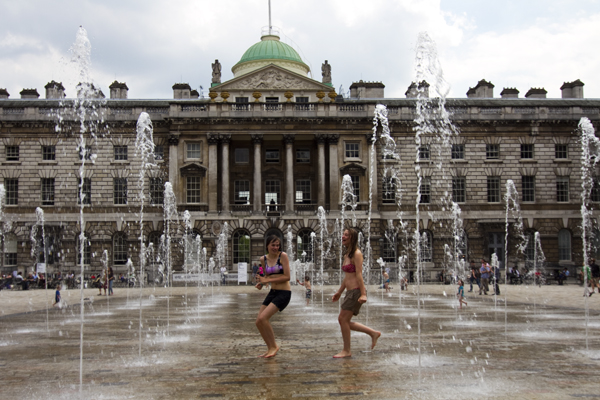 The fountains in front of Somerset House. Photo by David Lansing.

It’s been hot here in London. Hyde Park is dry and brown and nobody sits on the benches that aren’t shaded. In the Underground they play announcements warning people of dehydration and heat stroke. And everyone seems to know exactly when it last rained (two months ago? Three months?).

I was going to go to the Tate Modern this morning but it was just too damn hot. Instead, I took the Tube to Embankment, walked across the Golden Jubilee Bridge, and strolled along The Queen’s Walk, one of my favorite haunts along the Thames. You buy an ice cream and listen to a busker or watch the punks skateboard in the shadows of the National Theatre and just sort of watch the world go by. A perfect place for a flâneur.

After I decided I wasn’t going to the Tate after all, I crossed back over the river and wandered aimlessly up Riverside Walk, ducking into cool alleys and getting lost in the various warrens off The Strand until I stumbled into the courtyard of King’s College.

I’ve been to London a hundred times and never knew this place existed—a cobblestone quad with fifty or more dancing fountains shooting up into the sky, sometimes just a few feet off the ground and other times into a fire hose. What a great spot for kids to cool off. And there were lots of them here, all being carefully watched over by their mums who sat at black metal tables eating ice cream or munching sandwiches.

I struck up a conversation with one mum whose little tyke sat astride one of the fountains in such a way that it looked as if we were taking an arching 10-foot long pee. He couldn’t have been more than two or three years old—but certainly looked like he knew exactly what he was doing (and was immensely enjoying doing it).

His mother glanced my way, smiled, and said, “Well, yes, boys….” As if that’s all that needed to be said. And I suppose it was.