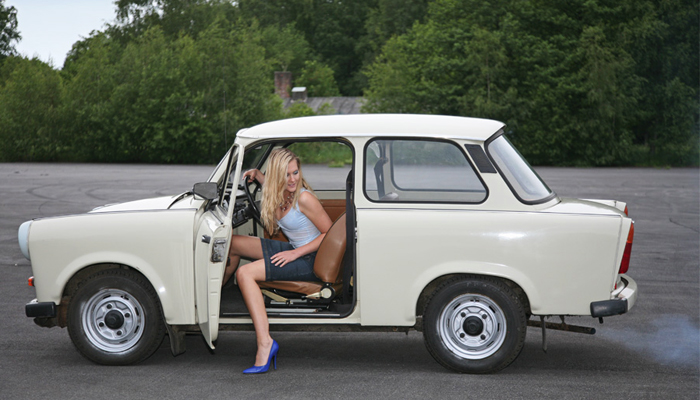 A reader tells me that the easiest way to start a Trabi is to push it and then hop in. Sort of like what she's doing.

After reading my blog yesterday about the old East German Trabis, a Berliner sent me an e-mail with some interesting Trabant trivia. According to him, the car is of very simple construction “It has a two-cylinder, two-stroke 594cc engine, and a four-speed column shift gear box, with a free-wheel in fourth gear, which is similar in design to older Saabs.”

The engine is so light that it can be changed by one person lifting it out (which perhaps explains why the Trabi eternally parked in front of the Paris Bar has no motor). In Trabi rallies in the former East Germany, it was common to carry a spare engine in the boot in case of breakdowns. The fuel supply is gravity fed, and the petrol tank is mounted directly above the engine.

The Trabi had a galvanized steel chassis (dipped in bitumen for rust protection), with panels of compressed plastic and cotton “alloy” screwed into the steel frame. Consequently it is very light, which gives it excellent breaking and acceleration considering its primitive drum brakes and a 28 horse power engine. However, its performance is similarly reduced with any sort of a head wind, and is reduced approximately by 10% for each additional passenger.

The easiest way to start a Trabi, he says, is to push it and then hop in.

Finally, writes this reader, the Trabi accelerates from 0 to 80km/h in under 20 seconds, but will only reach 100km/h “with a generous head wind or favorable hill, though this is certainly not to be recommended.”

Still, it would be worth a go, don’t you think?